As she mourns the loss of her beloved family member, the former 'Charmed' actress takes upon herself to react strongly against POTUS' tweet in which he denied calling the coronavirus a 'hoax.'

AceShowbiz - Holly Marie Combs has publicly called out Donald Trump for the death of her grandfather. When sharing the heartbreaking news about the passing of her beloved family member because of the cononavirus pandemic, the former "Charmed" actress dubbed the 45th President a "disgrace to the human race."

In a tweet dated Monday, April 27, the 46-year-old wrote, "My grandfather died today. He voted for you. He believed you when you said this virus was no worse than the flu. He believed every lie you muttered and sputtered." She continued, "He died today from Covid-19 one day after his 66th wedding anniversary. You're a disgrace to the human race."

The actress playing Ella Montgomery on "Pretty Little Liars" expressed her fury in response to POTUS' April 25 tweet in which he insisted, "I never said the pandemic was a Hoax! Who would say such a thing?" He added in the same tweet, "I said that the Do Nothing Democrats, together with their Mainstream Media partners, are the Hoax. They have been called out & embarrassed on this, even admitting they were wrong, but continue to spread the lie!" 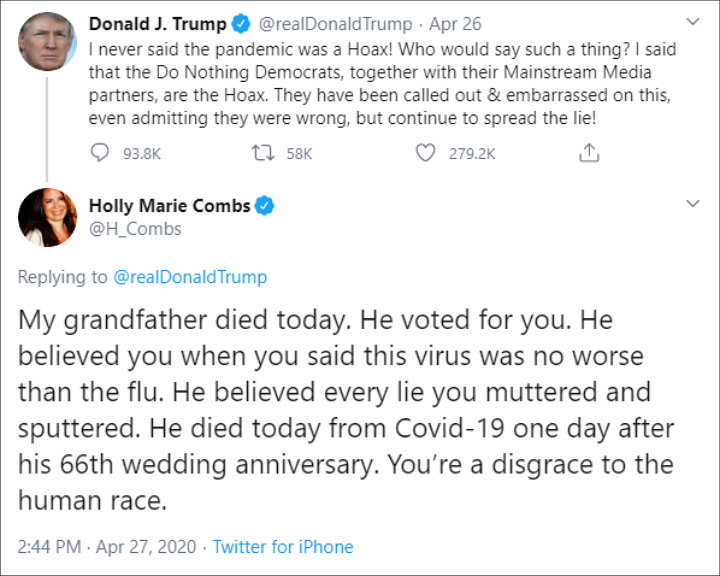 Holly Marie Combs is blaming Donald Trump for the death of his grandfather.
See also...

While Trump denied the controversial statement, he did accuse Democrats of trying to use the pandemic to damage him. "The Democrats are politicizing the coronavirus," he said at a Charleston, South Carolina rally on February 28.

"One of my people came up to me and said 'Mr. President they tried to beat you on Russia, Russia, Russia. That didn't work out too well.' They couldn't do it. They tried the impeachment hoax that was on a perfect conversation," POTUS went on ranting. "This is their new hoax."

As for Combs, the former "Picket Fences" star has received many words of condolences in the wake of her Twitter rant. Nevertheless, she was also flooded with backlash from Trump supporters. One in particular blasted her, "Sorry for your loss but how dare you blame Trump! Absolutely disgraceful and your wonderful grandfather would probably feel the same way about your despicable behavior!"

The 'Charmed' alum clapped back at Trump defenders.

Refusing to back down, Combs fired back at the haters with another tweet the following day. "Zero tolerance for Trumpers. Zero. Take it to someone else's timeline. Not today Satan," the actress wrote in response.