Gushing over the late veteran actress, the 'Designated Survivor' actor says, 'My mother was an extraordinary life. Sadly she had been battling for her health for quite some time.'

AceShowbiz - Kiefer Sutherland shared devastating news about the passing of his actress mother Shirley Douglas on Sunday, April 5. The impassioned Canadian activist was 86.

Sutherland explained on his Twitter account, "Early this morning my mother, Shirley Douglas, passed away due to complications surrounding pneumonia." The "Designated Survivor" actor, however, assured that the death of his mother was not related to COVID-19.

Gushing over the late veteran actress, Sutherland continued writing, "My mother was an extraordinary life. Sadly she had been battling for her health for quite some time and we, as a family, knew this day was coming." 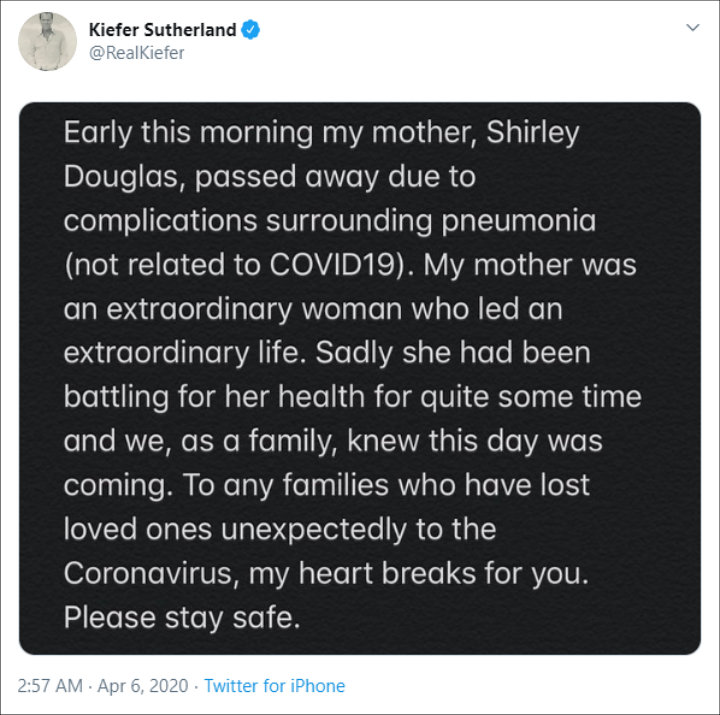 Born on April 2, 1934, Douglas was most known for her roles in Stanley Kubrick's "Lolita" (1962) and David Cronenberg's "Dead Ringers" (1988). She also won a Gemini Award for her performance in the 1999 TV film "Shadow Lake". Additionally, Douglas showed tireless support to a variety of causes throughout her life, including the civil rights movement, the Black Panthers and the fight to save Canada's public healthcare.

Prior to her marriage to Canadian actor Donald Sutherland, with whom she had two children (twins Rachel and Kiefer Sutherland) before they divorced, she had another son Thomas from a previous marriage.

Having been interested in arts as well as politics since she was young, Douglas attended the Banff School of Fine Arts and later studied at the Royal Academy of Dramatic Art in England. Douglas joined campaign against the Vietnam War and protested for various causes back in the 1960s and '70s. She also was a co-founder of the first chapter in Canada of the Performing Artists for Nuclear Disarmament.