While the wax figure in the Berlin museum wears the exact outfit that the Young Money artist wears in her iconic 'Anaconda' music video, it bears little resemblance to her.

AceShowbiz - Nicki Minaj has gotten herself a new wax figure treatment, though her latest one has left a lot of people scratching their heads. They aren't too happy when the Berlin branch of Madame Tussauds unveiled a new figure of the Young Money artist on Tuesday, January 7.

The figure is dressed in the exact outfit that Nicki wore in her iconic 2014 "Anaconda" music video and poses on all fours. However, the statue bears little resemblance to the self-proclaimed black Barbie as its face is much narrowed and features more elongated profile. This, naturally, angered a lot of her fans who were quick to attack and accused the museum of disrespecting Nicki. 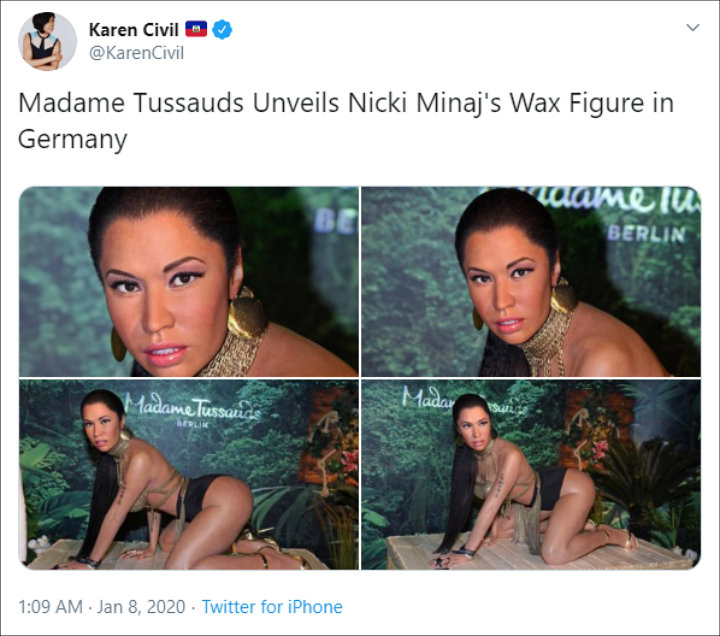 "If I was @NICKIMINAJ I would have them take that wax figure down ASAP," one said, as another admitted, "I can't stand Nicki... but that wax figure was straight disrespectful." Someone suggested that whoever created the wax figure "needs to be fired," while an individual commented, "I think the person who finally got Beyonce's wax figure right, should be put on ALL black wax figures... him and him only! This is ridiculous."

One person asked, "Who is responsible for this??? My sis did not deserve this." On the other hand, another wrote, "They got my girl nicki wax figure looking like a white woman." Somebody else accused the museum, "I don't know how but that Nicki Minaj wax figure is absolutely racism." There were also people who joked that the statue is a wax figure of Sandra Bullock, not Nicki Minaj. Even Queen Naija couldn't help but weigh in, "This ain't it Germany... this head is too long."

Nicki herself has yet to respond to this, neither does Madame Tussauds. The museum has angered fans with botched wax figure prior to this. For instance, back in 2017, fans called Lady GaGa's wax figure in Lima, Peru an "alien cockroach."