Her husband, Tanner Tolbert, has since denied the allegations by saying that people only accuse his reality TV star wife of violating the rules because she's a woman.

AceShowbiz - Jade Roper won big in a recent fantasy football contest, but not without controversy. "The Bachelor" alum has been accused of cheating after she won first place in DraftKings' Millionaire Maker contest for the NFL's wild-card round and got herself a whooping $1 million as the reward.

Public first learned of her win on Sunday, January 5, when a Twitter user tweeted, "I'm pretty sure this girl was on The Bachelor. I only know this because my girlfriend forces me to watch," alongside a screenshot of her win. In reply to that, she wrote, "Hahaha! That's me! And Tanner told me I shouldn't play DK Metcalf." 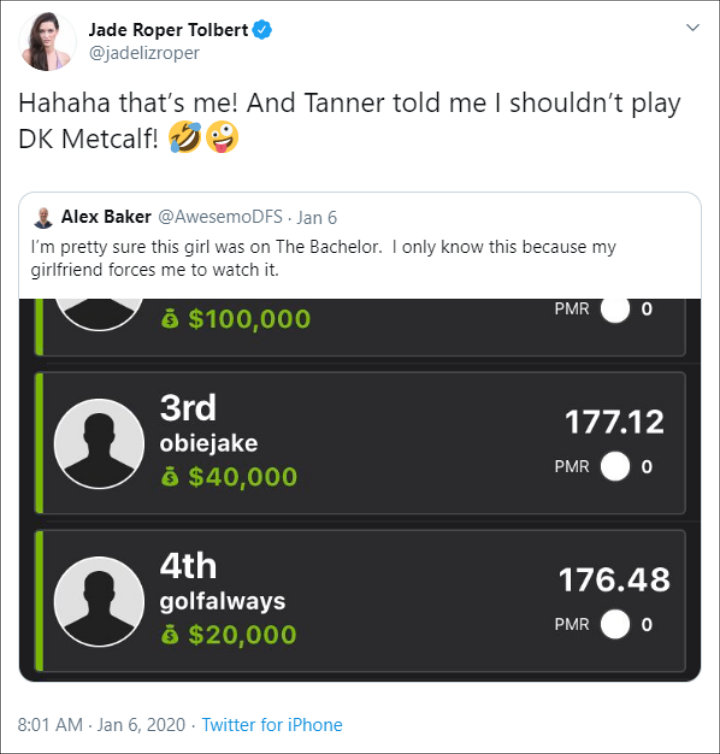 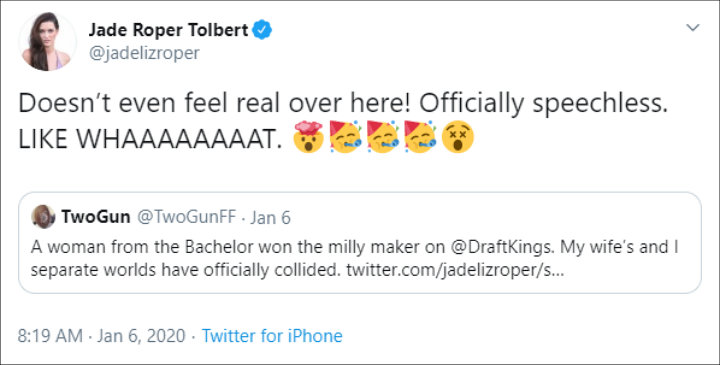 However, people soon began to suspect that she and her husband, Tanner Tolbert, worked together in order to win and submitted 150 unique lineups each, meaning that they had 300 total combinations. That was a violation of rules as one person is only allowed to submit 150 lineups. Moreover, one user pointed out the breakdown of the quarterbacks that both of them submitted and said that there was a pretty coordinated effort to avoid overlaps and maximize possible winning outcomes.

This made people accuse them of collision, to which Tanner had denied. "We each put in our separate players, in our separate accounts and rooted for own players," he told ESPN on Monday. "No one has ever said a peep about us when we lost 17 straight weeks. Then, of course, somehow Jade picked the right lineup, got the million and the spotlight got shone on it. And people, especially since she's a woman, assume that I do it all for her. If I had won, I bet no one would've raised a flag."

CEO of DraftKings Jason Robins himself has announced that the case is currently being investigated. In a statement, he said, "I understand everyone wants answers and we are trying to work quickly, but I personally just learned about this within the past hour or two. There have been whispers of this occurring previously (by other contestants), but now that there is a million dollars being won, I think that the DFS sites have to act quickly to close this loophole."

'BiP' Star Jade Roper on Accidentally Giving Birth to Son in Closet: 'I Felt So Out of Control'