The 'F**kin' Problems' rapper appears to confirm it's him who is featured in the footage as he hits back at those who judge his performance in bed based on the video.

AceShowbiz - A$AP Rocky has spoken up after a graphic video featuring someone who is believed to be the rapper leaked online. Appearing to confirm that he's the one featured in the footage, the 31-year-old posted an NSFW response on his Twitter page on Thursday, December 19.

The "Fuckin' Problems" hitmaker clapped back at negative judgment regarding his performance in bed based on the video. "MY PENIS AND I WOKE UP 2 THE ALARMING DISTURBANCE OF A VIDEO CLIP 2DAY," so he wrote.

He continued, "AS HIS DEFENSE ATTORNEY WE'RE PREPARED 2 DENY ANY SLOW STROKES OR LACK OF KILLIN THE P***Y .A LONG LIST OF SATISFIED WOMEN CAN ATTEST TOO. BUT THE REAL PUNCHLINE IS SEEING PPL WHO NEVER F**ED HIM RATE HIM." 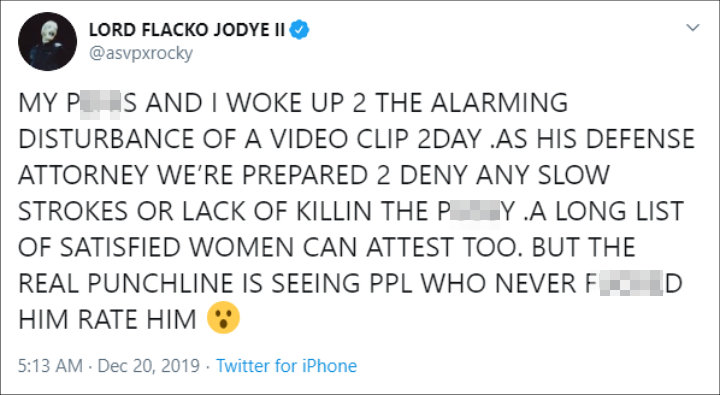 People soon reacted to the video, with many roasting the star, whose real name is Rakim Athelaston Mayers, for his "weak" performance. "So ASAP Rocky Sex tape leaked and apparently his stroke game is weak. Everybody disappointed but did y'all really think mr 'I don't care about black people bc I live in Beverly Hills now' really put work in? Come on son," one posted on Twitter. Another user wrote, "And y'all had the nerve to call ASAP Rocky the Rihanna of men... I'm sure her stroke game is better."

The leaked sex tape came amid rumors that Rocky is dating Rihanna. The Barbadian singer was reported to have broken up with Saudi billionaire Hassan Jameel after she and the rap star posed together on the red carpet of British Fashion Awards early this month.

The "Umbrella" songstress was later seen supporting the Harlem-born star at his concert in Stockholm, Sweden on December 11. Further fueling the dating speculation, they were allegedly spotted having a dinner date in London just a few days later.

A$AP Rocky Hangs Up on Tyler, the Creator on Instagram Live Over His Flirty Question