Sharing her own struggle to lose weight after giving birth to her son with Chris, Aeko, the model encourages a fellow mother to take it easy with getting back in shape.

AceShowbiz - After hiding her pregnancy for months, Chris Brown's baby mama Ammika Harris has now opened up about her own postpartum body. The 26-year-old recently took to Instagram to share a photo of her rocking a pink sweatshirt that has left her followers gushing, but she admitted that she isn't pleased with her current figure.

A fellow mom praised her and called Ammika her inspiration to lose weight, commenting on the post, "You are so beautiful and so positive! I have two little girls and am motivated by you to get my mom bod back!!!!! Thank you for keeping positive vibes in the world!!!" Ammika then replied to the said fan, "give it time love! I still have a little belly and far from where I want my body to be." 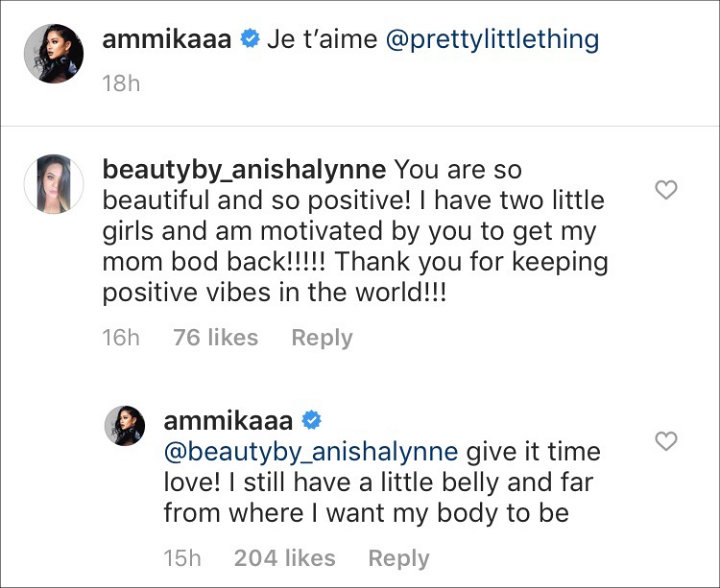 Ammika Harris gets honest about her struggle to lose weight after pregnancy.
See also...

Ammika gave birth to her and Chris' son Aeko Catori Brown in November. After hinting at the baby's arrival in a series of Instagram posts, the "Beautiful People" hitmaker and his baby mama eventually showed their son's face earlier this month.

They also shared Ammika's photos from her maternity shoot, revealing her baby bump for the first time. "Aeko did you know that you used to live in my tummy," the mother of one captioned a snap showing her wearing shiny, jewel-studded pyjamas.

Ammika additionally appeared to be confiding about her experience as a new mom when she posted on her Instagram Stories, "TIRED" in all caps.

While Aeko is Chris and Ammika's first child together, the 30-year-old R&B star also has a 5-year-old daughter, Royalty Brown, with former flame Nia Guzman. Chris was dating Karrueche Tran when it was revealed that he's fathering a daughter, leading to his split from the 31-year-old model whom he dated on-and-off from 2012 until 2015.