The 'Do the Right Thing' director has paid a heartfelt tribute to his late co-star, while Cher remembers the fun time she spent together with the actor during 'Moonstruck' filming.

AceShowbiz - Director Spike Lee has paid a touching tribute to Danny Aiello after the actor passed away from a sudden illness on Thursday, December 12.

Aiello, who received an Academy Award nomination for his work in Lee's 1989 classic film, "Do the Right Thing", died at 86 in New Jersey after suffering from an undisclosed sickness, and Spike is grief stricken.

"I'm ??'? Broken (sic)," the filmmaker wrote in a caption on Instagram on Friday attached to an image of him with Danny from the movie. "Just Found Out My Brother DANNY AIELLO Made His Transition Last Night. Danny,We Made Cinema History Together With DO THE RIGHT THING. May You Rest In PARADISE."

Singer and actress Cher, who starred with Aiello in 1987 romantic comedy "Moonstruck", also expressed her heartbreak at the sad news.

"Goodbye Dear #DannyAiello Danny was a Great Actor, But a Genius Comedic Actor.We Laughed so much. Making #Moonstruck ..It was one of the happiest times in my life,& He Was apart of that Happy time (sic)," Cher wrote on Twitter. 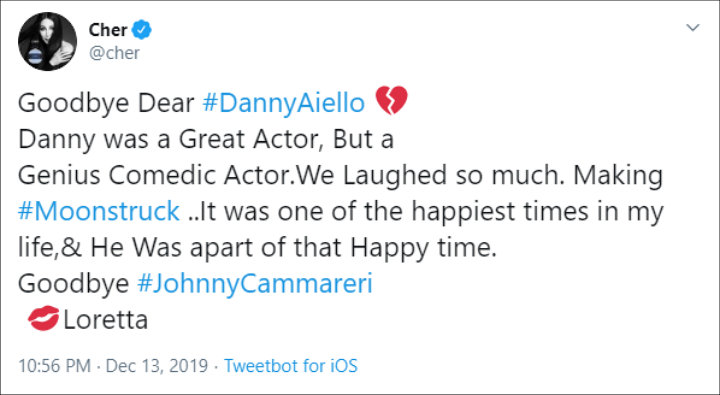 Loved ones of Aiello have requested privacy to grieve as they deal with the sudden loss of the star.

"It is with profound sorrow to report that Danny Aiello, beloved husband, father, grandfather, actor and musician passed away last night after a brief illness," relatives wrote in a statement issued to TheWrap. "The family asks for privacy at this time. Service arrangements will be announced at a later date."

Aiello appeared in 105 films in his decades-long career, including "The Godfather Part II", "Jacob's Ladder", "Harlem Heights" and "The Purpose Rose of Cairo".

Spike Lee Pleads With African-Americans to Get Covid-19 Vaccination