The reality TV star takes to her Instagram account to share a text conversation she has with son King Conde (11) in which he tries to convince her mom to vaccinate his unborn sister.

AceShowbiz - Erica Mena has fallen victim to mom-shaming after she reveals that she's not planning to vaccinate her baby girl, whom she's expecting with husband Safaree Samuels. The "Love & Hip Hop: Hollywood" star took to Instagram to share a text conversation she had with son King Conde (11) in which he tried to convince her mom to vaccinate his unborn sister.

In the screenshot that Erica shared on November 7, King, whom she shares with ex Raul Conde, could be seen telling his mom, "Just admit youre wrong and give up." The 32-year-old star responded, "Don't talk to your mother like this is disrespectful and not gonna be tolerated."

King then said that he was just being concerned with his little sister's health. "Oh, I'm sorry for wanting my baby sister to live as healthy as possible. While youre convinced ignoring what right for her is fine? Im sorry for possibly being disrespectful but im only being that way because im passionate about this," he wrote, before adding an "I love you."

Despite their disagreement, Erica praised her son. "Look at you being a great big brother. I can't for her to get here so you can defend her with all your might," she wrote back to King.

Captioning the picture, Erica said, "My son King is not letting up on his reasons why we should vaccinate the baby." 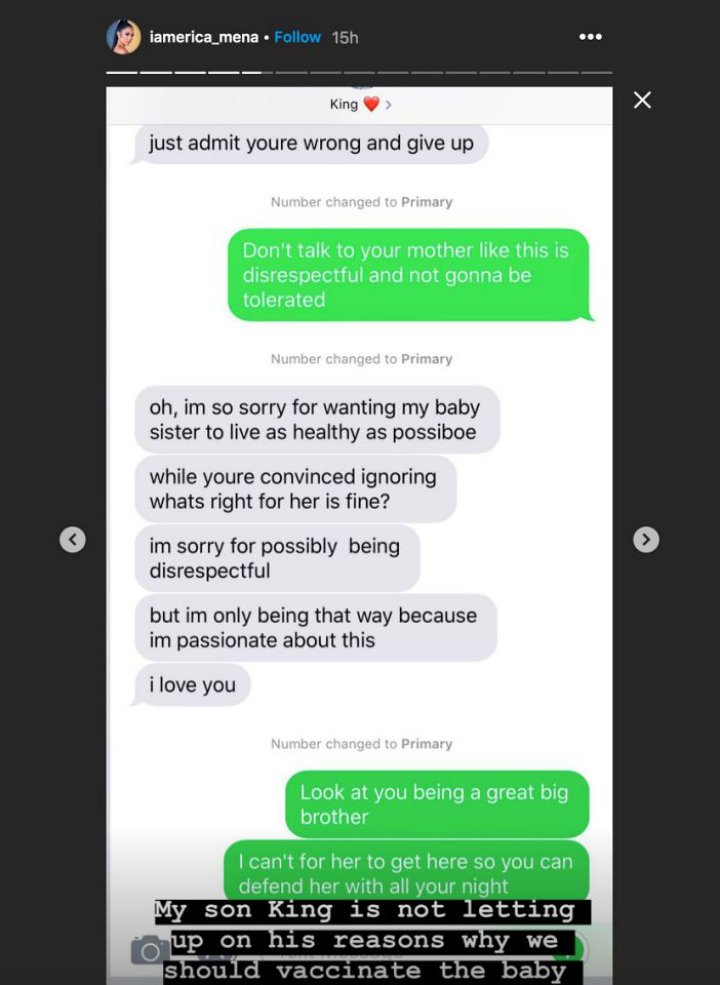 Erica Mena and son are arguing about vaccinating her unborn baby.

Apparently, sharing the picture to her 4.6 million Instagram followers only earned her more criticism from people. "It's sad that the 11 year old has to fight to do the right thing for his baby sister," one fan commented on Instagram. Echoing the same sentiment, one person wrote, "How sad is it that your 11 year old has more sense then you do?"

Meanwhile, another fan schooled Erica with a lengthy comment that read, "I vaccinate my child? Why? Because I don;t want my kid to die, or contract mumps and never have the option of having children of his own. Vaccines are not the cause of autism. That myth was debunked years ago, but people trying to find reasons to not vaccinate their kids have brought it back like there’s truth to it."

The person continued, "But whatever you believe, I think the question should be this? Would I rather have a child who's alive, and who might have autism, or would I rather be the parent to a child who died from an infection disease that could've been prevented?"

Meanwhile, Safaree has yet to weigh in on the matter.