Zack Clayton Carpinello apologizes to both his ex-girlfriend Jenni 'JWoww' Farley and her 'Jersey Shore Family Vacation' co-star Angelina Pivarnick, who accused him of groping her in Las Vegas.

AceShowbiz - Jenni "JWoww" Farley's former boyfriend Zack Clayton Carpinello has broken his silence after she dumped him over groping allegations launched by her "Jersey Shore Family Vacation" co-star Angelina Pivarnick. On Friday, October 11, he took to Instagram to admit to his "mistakes" and apologize to both ladies.

"I made mistakes that I cannot take back, which I take full responsibility for," Zack wrote in a statement posted on his social media account. "Jenni does not deserve any damage from anybody else. This is on me. I sincerely apologize to Jenni. I apologize to Angelina as well."

JWoww called it quits with her boyfriend of five months, Zack, after watching the latest episode of her reality series, in which Angelina accused Zack of hitting on her and groping her in Las Vegas. "I just feel his hand go [slapping her bottom] right on me," she said.

Recalling the awkward moment at the club where she danced close to Zack, Angelina shared in a confessional, "One minute he's asking me about my sex life, the next minute he's grabbing me! He doesn't know what boundaries are. This is gonna be a problem."

JWoww reportedly dumped Zack on the same day the episode aired. "After seeing tonight's episode I'm pretty hurt," she wrote in an Instagram post. "I feel disrespected by someone I called a friend and by someone who stated they loved me."

She added, "For 5 months I was kept in the dark about this. For 5 months I was naive, probably laughed at and made into a story line that will forever haunt me. My heart hurts on so many levels. One thing I learned from tonight's episode is know your value. Don't ever lower your standards." 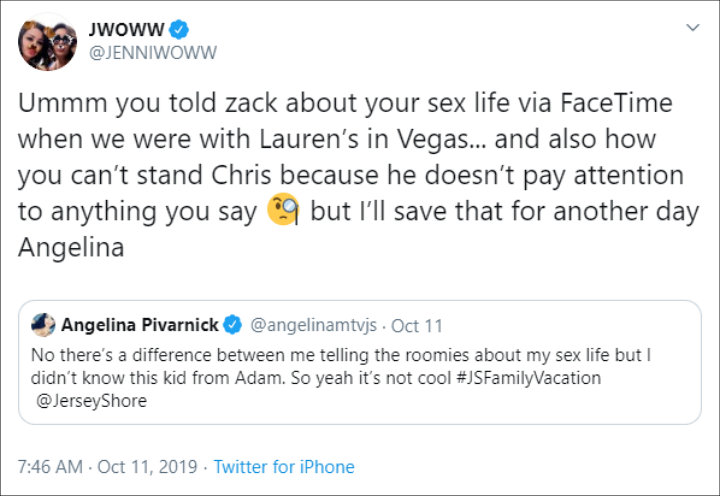 Calling out Angelina on Twitter, JWoww also tweeted, "Ummm you told zack about your sex life via FaceTime when we were with Lauren's in Vegas... and also how you can't stand Chris because he doesn't pay attention to anything you say but I'll save that for another day Angelina." 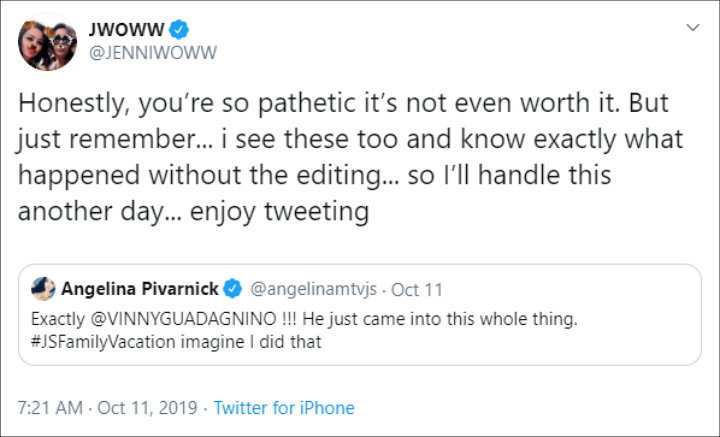 She wrote in another post, "Honestly, you're so pathetic it's not even worth it. But just remember... i see these too and know exactly what happened without the editing... so I'll handle this another day... enjoy tweeting."