The 'Where Are U Now' hitmaker proposes to go on a double date with the Australian singer and bring their respective partners Hailey Baldwin and Miley Cyrus.

AceShowbiz - Justin Bieber loves Cody Simpson and his body. The "Where Are U Now" hitmaker, impressed with the Aussie hunk's six-pack abs, left a comment on the latter's shirtless picture on Instagram. "Ur body is a wonderland," he wrote, cheekily making a reference to John Mayer's classic romantic love song.

25-year-old Bieber, who recently married Hailey Baldwin in a second wedding, quickly followed it with another comment, saying he would love to go on a double date with the 22-year-old Simpson who just started dating former Disney star Miley Cyrus. "Text me," the Australian singer/songwriter responded. 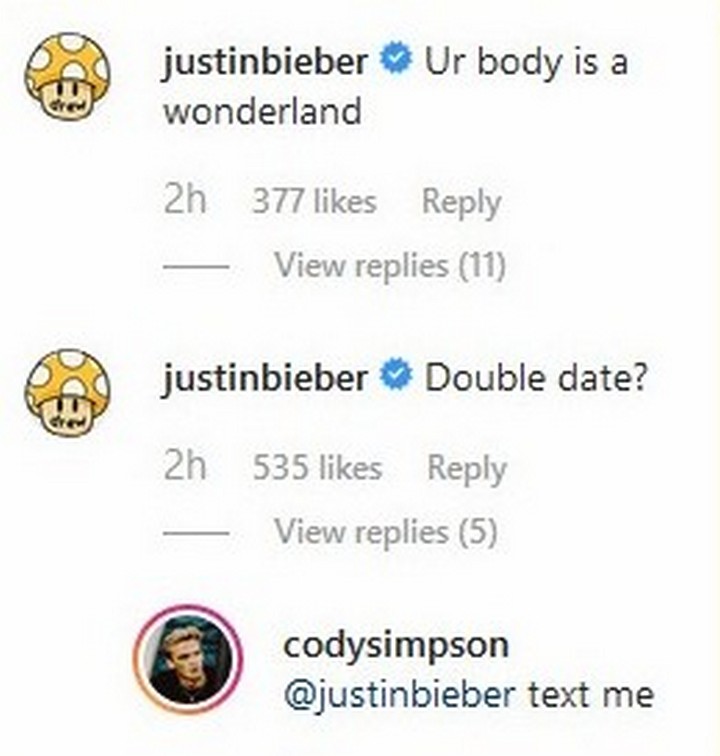 Cody Simpson currently helps nurse his 26-year-old girlfriend back to health following her hospitalization. The new lovebirds are now back home after she was discharged from the hospital. Before checking in to the hospital, Miley shared on Instagram Stories that she's suffering from tonsillitis.

Cody and Miley only sparked dating rumors after they were first spotted making out early this month, but Cody had long crushed on Miley. He called her his "childhood celebrity crush" in a 2012 interview. "I knew all the words to her songs, I'm not gonna lie. I'm not ashamed about it, at all," he confessed. "I was a big Miley Cyrus fan. I think she will be, forever, the most dateable Disney star."