Two corrections officers have also been disciplined after the '2 Phones' rapper flaunted $100 bills during his visit to Elayn Hunt Correctional Center back in July.

AceShowbiz - Kevin Gates' visit to the Elayn Hunt Correctional Center earlier this year has caused troubles, not only for himself, but also for two corrections officers at the facility. The rapper has been banned from all Louisiana corrections institutions and two correctional officers have been disciplined following his visit several months ago.

Back in July, Kevin visited his father Elayn Hunt. At the time, the star whose real name is Kevin Jerome Gilyard posted a picture of him flaunting a handful of $100 bills while posing with a group of inmates, including Corey "C-Murder" Miller. "I went up to the Prison today to visit #LeeLucus #CMurder #Mac #BigMarlo and #Cornbread everybody in these photos have been gone over 20 years," he wrote on his Instagram post. 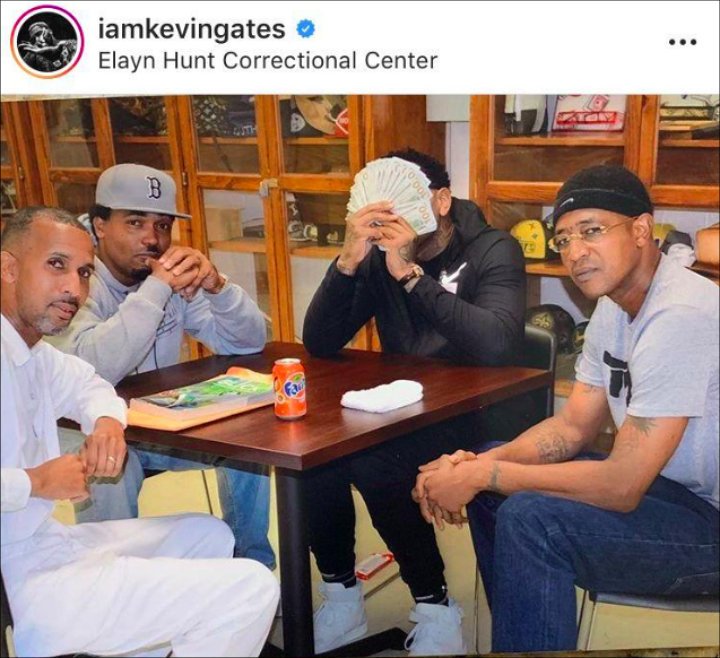 After an investigation by the Department of Public Safety and Corrections, it's found that Kevin violated multiple rules during his visit. Ken Pastorick, a spokesman for the state corrections department, said one of the policies says that a visitor is not allowed to bring more than $300 into the prison.

A DOC report details Deputy Warden Perry Stagg and Major Jason Linzy disobeyed several standard institutional policies during Kevin's visit, including letting the 33-year-old enter the facility without going through body scanners and allowing him to drive his car through the front gates without being searched.

Kevin, who was escorted by Warden, also broke the rule when he avoided the visiting office and didn't sign the visitor's log acknowledging he understood facility rules. While he claimed he was visiting his father, the investigation found Kevin has no verified family relationship with any of the inmates he visited that day. Jason supervised the visit, which was documented on Kevin's Instagram post.

The "Really Really" spitter, who was arrested for felon in possession of a firearm in 2017, also did not submit to a criminal history screening prior to his visit. With his record of felony charges in the last five years, he would not have been allowed to visit the facility in the first place.

Kevin has not responded to the ban issued by the Department of Public Safety and Corrections.

Kevin Gates Expecting Baby No. 3 With His Wife