Brandt Jean himself has been criticized by a lot of people for forgiving the white cop who killed his 26-year-old brother in his own apartment in early last month.

AceShowbiz - Everyone was criticizing Botham Jean's brother, Brandt, for forgiving and embracing the ex-cop who killed his brother, but Chris Evans wasn't one of them. In fact, the former Captain America depicter even took to Twitter on Wednesday, October 2 to praise his action, before he found himself landing in hot water over his tweet.

For those who don't keep up with the whole story, Amber Guyger walked into the apartment of Botham and shot him dead. In her defense, she said that she was exhausted and believed that the apartment was her own, so when she stumbled upon Botham, she believed he was an intruder and killed him. She was found guilty of murder and sentenced to 10 years of prison on Wednesday.

Learning of her sentence, many took to social media to express their displeasure, but it was Botham's brother's reaction that caused even more outrage. He hugged her and told her, "I love you just like anyone else and I'm not going to hope you rot and die. I personally want the best for you. I wasn't going to say this in front of my family, I don't even want you to go to jail. I want the best for you because I know that's exactly what Botham would want for you. Give your life to Christ."

Many people were upset by his reaction as they pointed that black people had never received this kind of treatment when they were the ones in the wrong. And Chris Evans just made them more mad when he quote-retweeted a tweet about the moment while adding, "This is easily one of the most beautiful things I've ever seen." 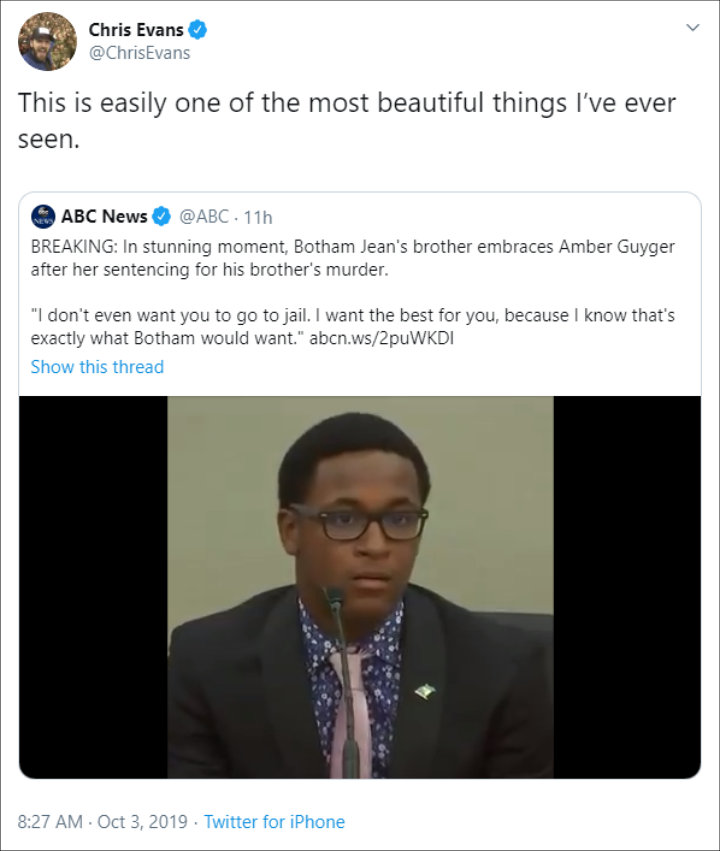 But people begged to differ. "This s**t is traumatizing to watch. Like I am legit having an episode," one person said. "Why do you keep digging ur hole deeper," another upset fan commented, while some others urged him to delete the tweet "before it's too late." Someone wrote, "I'm usually on board with you Chris but this ain't it," with another telling him not to "praise this kind of 'forgiveness.' "

"Of course you'd agree to it, just like a white savior," an individual shaded him, as one person argued, "Actually Chris this is one of the saddest things I have ever seen." There was also one who said, "There is nothing beautiful about a woman getting a mild sentence after murdering someone, then being showered with sympathy, even from the victims family. This idea that we have to be the bigger person ALL the time even in the face of blatant injustice is disgusting."

Chris has yet to respond to the backlash.

Chris Evans on Donald Trump's Call to Not Be Afraid of COVID-19: Reckless to a Shocking Degree