Nick reveals that he and his sister Angel have just filed a restraining order against their brother due to his alarming behavior and intention to kill both Nick's pregnant wife and their unborn child.

AceShowbiz - Family drama between Aaron and Nick Carter has just escalated for the worst. Nick revealed to his social media followers on Tuesday, September 17 that he and his sister Angel had just filed restraining order against their brother due to his "increasingly" alarming behavior. Not only that, but Nick also accused Aaron Carter of intending to kill his pregnant wife.

In the statement he shared on the micro-blogging site, "In light of Aaron's increasingly alarming behavior and his recent confession that he harbors thought and intentions of killing my pregnant wife and unborn child, we were left with no choice but to take every measure possible to protect ourselves and our family."

Nick then assured that both him and Angel do not hate Aaron and "truly hope he gets the proper treatment he needs before any harm comes to himself or anyone else."

TMZ reported that according to the papers, Aaron is required to stay at least 100 feet away from Nick, his wife, kids and other family members. He is also strongly ordered to stay away from their residence in Las Vegas.

Feeling so wronged, Aaron immediately went on Twitter rant and blasted his brother for what he had just did to him. "We're done for life," the "I'm All About You" singer said on the blue bird app, before stressing that he had never seen Nick for four years. Denying the allegation made against him, he then added, "And I don't intend."

Aaron didn't stop there as he continued to debunk the allegation, "I am astounded at the accusations being made against me and I do not wish harm to anyone, especially my family." He continued in another tweet, "All I ask is for my family to leave me alone. This is blood. Not love. I will never be around you and I don't want to be around you. I am the one who said I'm done then you send me this!? Ok."

Aaron Carter admitted he's astounded by the accusations made against him.

Later, he threatened to file a "harassment suit" against Nick if he didn't stop trying to put him on 5150 psychiatric hold. The 31-year-old begged in a separate tweet, "LEAVE ME ALONE FOR THE REST OF MY LIFE. IM BEGGING YOU PLEASE. I haven't even seen you guys and nick you bullied me my whole life. And tortured me as a child. And everyone knows it. ITS BEEN PUBLIC. and now you're scared of the truth." Attached on the post was a throwback video of Aaron and Nick fighting. 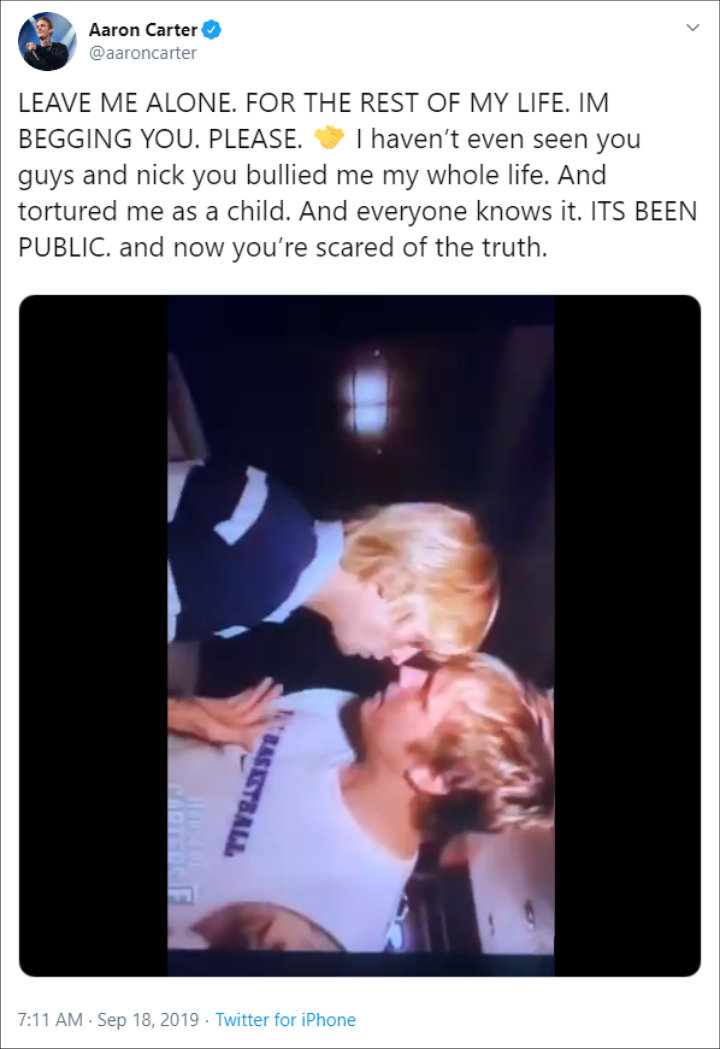 Aaron Carter claimed Nick bullied him all the time.