After the 'Avengers: Endgame' actress defended the filmmaker against molestation allegations, his estranged daughter slams her for coming short in understanding the issue she claims to champion.

AceShowbiz - Woody Allen's estranged daughter has attacked Scarlett Johansson for defending the filmmaker in a new interview and insisting she believes he never molested his kid.

Dylan Farrow maintains her father assaulted her when she was a child - allegations Allen has denied many times. And in a new interview with The Hollywood Reporter, the filmmaker's favourite leading lady reveals she has quizzed the director about the drama and believes he's innocent.

And now Dylan is firing back at the woman who has become a leading celebrity voice in the Time's Up anti-harassment and equality movement. 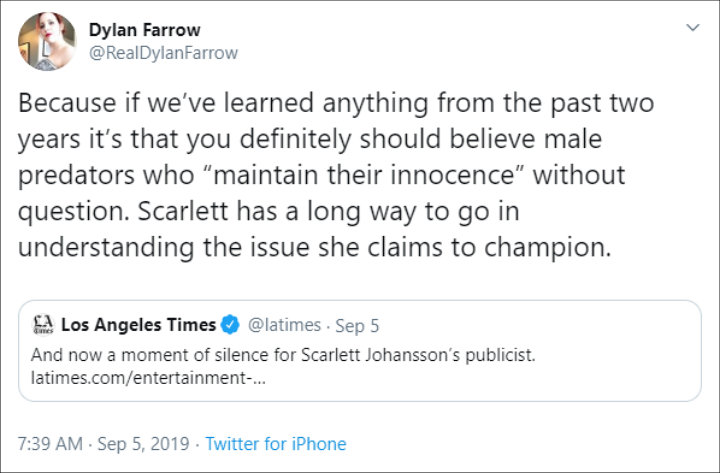 "Because if we've learned anything from the past two years it's that you definitely should believe male predators who 'maintain their innocence' without question," she tweets. "Scarlett has a long way to go in understanding the issue she claims to champion."