The actor playing Tony Padilla on '13 Reasons Why' reveals through a tweet that Disney has reached out to him and he has sent tapes to show what he could do in response.

AceShowbiz - Actor Christian Navarro has added his name to the list of hopefuls dreaming of landing the role of Prince Eric in "The Little Mermaid (2020)" now that Harry Styles has walked away from the project.

The One Direction star was the red-hot favourite to play mermaid Ariel's human love interest in the live-action Disney remake, but he reportedly turned down the part earlier this summer - and now "13 Reasons Why star Navarro appears to have dived in to the project.

The 28-year-old recently retweeted a post about Styles' exit, adding: "Well... I can sing... no ones called but Season 3 (of 13 Reasons Why) drops next week and (I) think it's one hell of an audition (sic)."

And it seems Disney bosses took the bait.

"@disney saw this, saw your support, and gave my team a call," he tweets. "They wanted to see what I could do. Tapes sent. Fingers crossed. Let's make some history... Let me know! @DisneyStudios." 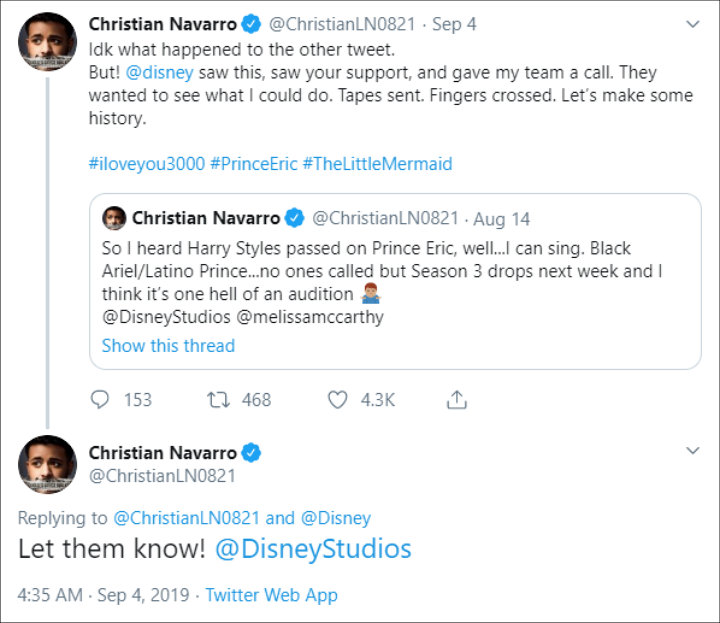 The '13 Reasons Why' star said that he had sent his tapes to Disney.

Halle Bailey has already been cast as Ariel and Melissa McCarthy is in talks to play the villainous Ursula.

Awkwafina and Jacob Tremblay have also been attached to supporting roles.

Meanwhile, "Shazam!" star Asher Angel has also revealed he is auditioning for the role of Prince Eric, telling Entertainment Tonight, "I went in for it. It means so much to me. I started off doing musical theatre."