The late 'Dog the Bounty Hunter' star told her daughter, 'No pain no gain,' hours before she was rushed to the hospital and placed on a medically induced coma.

AceShowbiz - Almost a month after Beth Chapman's death, her words of wisdom still linger in her daughter Bonnie Chapman's head. The daughter of the late reality TV star and Duane Chapman a.k.a. Dog the Bounty Hunter has revealed the last advice that her mom told her before her passing.

Bonnie took to Instagram Stories to share a screenshot of her last conversation with her mother. The text exchange dated June 22 started with a cut-off picture of Bonnie apparently showing her tattoo which she had just got. Beth commented below it, "Ouch, it looks like it hurt."

Bonnie admitted, "It hurt like a b***h you can see how much I was crying." Her mother then assured her, "It's very pretty. No pain, no gain." Bonnie ended the conversation by telling her mom, "I love you. I'll be there tomorrow."

But Bonnie never got a chance to talk to her mother again. Beth was rushed to The Queen's Medical Center in Honolulu hours later and was placed in a medically induced coma until she passed away on June 26. "No pain no gain. The last words she ever said to me," Bonnie wrote along with the screenshot. 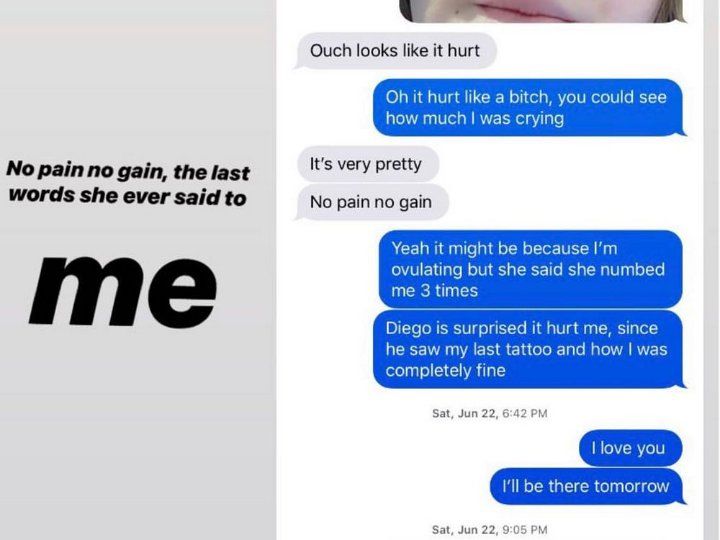 Beth was still filming her and Duane's new WGN America reality series "Dog's Most Wanted" after it was revealed that her throat cancer returned in late 2018. The show captures her final days as she joined her husband in pursuit.

"If I'm gonna die, I'm gonna die in my boots," she said in a newly released trailer for the show, as she revealed her receding hairline in another scene. Duane said while fighting back tears, "I love her and I'll do anything for her."

Duane said in a statement, "My wife is, was, and always will be the heart and soul of 'Dog's Most Wanted'. Beth wanted nothing more than for the show to go on, and I am so proud of the legacy that she left behind. She lived and died for this show, and she would be so proud of how hard we worked bringing these criminals to justice."

"Dog's Most Wanted" premieres on Wednesday, September 4 at 9/8c on WGN America.