The second memorial service for the late 'Dog the Bounty Hunter' star will be held at Heritage Christian Service in Aurora, Colorado on July 13, her husband Duane Chapman has announced on Twitter.

According to Dog's tweet which he posted on Monday, July 1, the service will take place at Heritage Christian Service in Aurora, Colorado on July 13. Doors will open at 1:00 P.M., and the service will begin at 2:00 P.M. 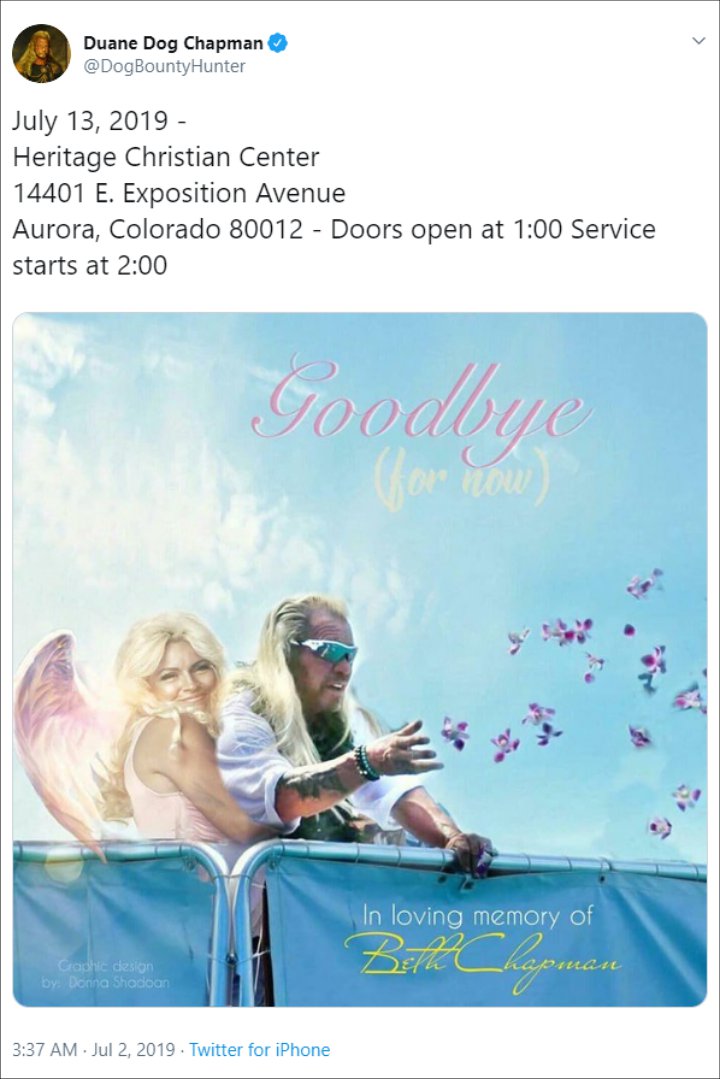 His announcement also serves as an invitation to family, friends and fans who wish to send Beth off for one last time. Her Hawaii memorial service, which was held over the weekend, was also open to public.

Her Hawaii memorial service was carried out in a traditional way, per the late star's wishes. It began with a traditional chant and prayer, before family and friends paddled out from Fort DeRussy Beach and tossed flowers into the ocean in her memory. Fans were asked to toss only ocean-friendly loose flowers and not lei, whose strings can harm marine life.

During the paddle-out, a group boarded an outrigger vessel, but Dog was not seen on board. TMZ reports that at the time, the bounty hunter and his kids quietly walked away and boarded a private boat to spread some of Beth's ashes in the sea. The family didn't spread all the ashes, possibly saving some for the second memorial service in Beth's native home state of Colorado.

Dog delivered a moving speech during the Hawaii memorial service. "After my mom died, I said well, 'My mom is in the Earth'... In my tribe, we believe she becomes part of the Earth, the sea, the sky and the rain. Beth is going to be placed here too, she got here before I did, it's my island," he said to the attendees.

Sharing Beth's wishes for her memorial and thanking people who came to send Beth off, he continued, "She said, 'Please, Hawaiian style, Duane Dog Chapman.' I tried to have her call me Dog for so many years. She said, 'Please do this right,' so I appreciate everyone being here. I have to go out on the boat so I can see everybody right, its Hawaiian tradition and style. Thank you all, God bless, Aloha."

Beth died on June 26 after being hospitalized and placed in a medically induced coma for days due to her stage 4 throat cancer. Her battle against the illness was filmed for the couple's new reality show "Dog's Most Wanted", which will reportedly premiere in 2020 on WGN America.