It all starts after the 'Famous in Love' alum claims on the micro-blogging site that she and Tana 'are no longer good,' adding, 'She broke girl code I'm over it.'

AceShowbiz - Not only ending their relationship, but it looks like Bella Thorne and Tana Mongeau have also ended their friendship. The former couple was caught in a heated Twitter exchange on Wednesday, July 17, and it all began after the Disney alum claimed on the micro-blogging site that she and the YouTube star "are no longer good." She added, "She broke girl code I'm over it."

Tana was apparently clueless about what she did wrong and replied with several question marks, before saying, "Imagine taking every time ur mad at me to twitter but then telling ppl how much u care about me............. wtf is this b :/." In response, Bella accused the blonde beauty of dating her for clout. "U legit started dating for twitter.. how about u answer ur phone and talk to me instead of being on Twitter," the "Famous in Love" alum quote-retweeted Tana's post.

Still not knowing why her actress ex-girlfriend is mad at her, Tana wrote back, "Dude what are you doing bella? Like I have no idea why you're mad, i've been texting you every minute since you tweeted, and for you to be tweeting me something as hurtful as saying I dated you for Twitter is literally f***ing nuts & if you honestly think that damn I lost you." 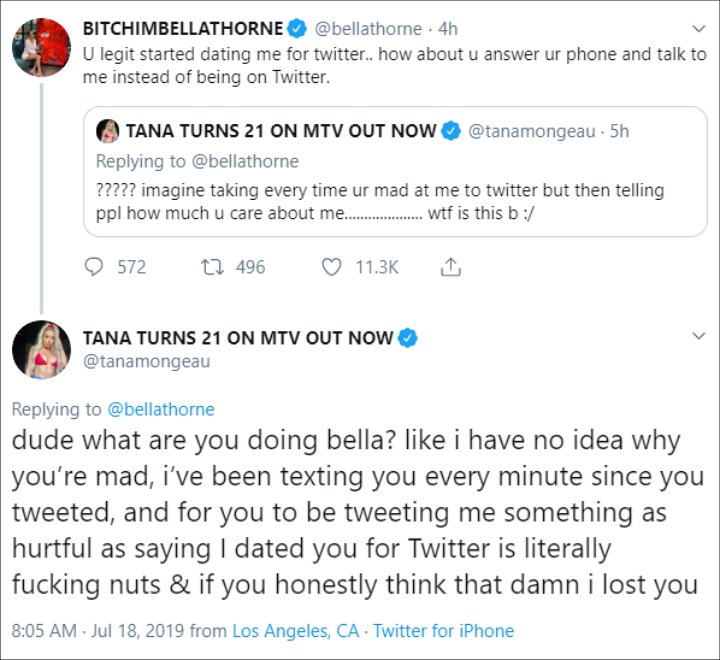 Bella has yet to respond back to Tana.

Tana and Bella dated for a little over a year. In February, the latter confirmed that they had called it quits. The two have since moved on from each other following the split, with Bella dating Italian man Benjamin Mascolo. Meanwhile, Tana is now engaged to fellow YouTube star Jake Paul. The couple is set to exchange vows later this month at the Graffiti Mansion in Las Vegas. The nuptials and the after-party at the Sugar Factory American Brasserie will be filmed for Tana's MTV show.