The British actress/model and the 'Pretty Little Liars' alum get people speculating they were celebrating something special after they were spotted wearing matching rings and kissing inside VIP Room nightclub.

AceShowbiz - Are wedding bells ringing for Cara Delevingne and Ashley Benson? The couple, who has been together for a little over a year now, has sparked speculations that they are taking the next step in their relationship by getting engaged.

The engagement rumors started to swirl after the pair were spotted wearing matching gold rings during their vacation in Saint-Tropez over the Fouth of July weekend. They sported the gold band each on their left ring fingers.

A few days later, the 26-year-old British model/actress and the 29-year-old American actress were snapped kissing inside VIP Room nightclub in Saint-Tropez. This has got people speculating that they might be celebrating something special during their holiday. 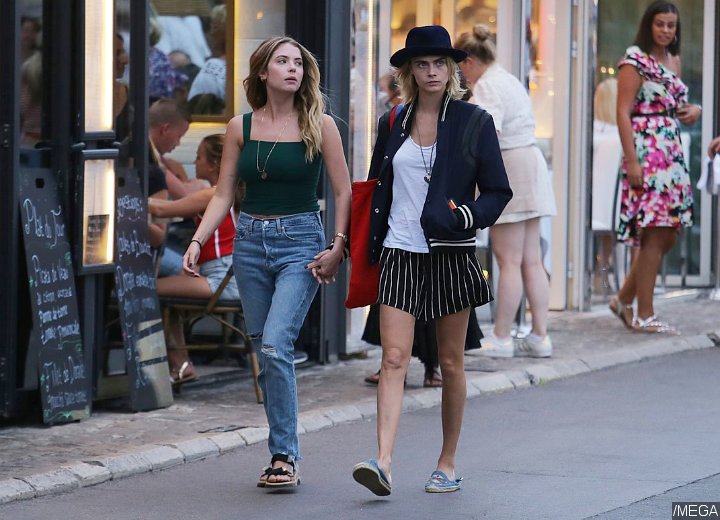 Cara Delevingne and Ashley Benson were spotted holding hands during vacation in Saint-Tropez.

"not to be dramatic but I LOVE CARA DELEVINGNE SO MUCH AND NOW ASHLEY BENSON AND HER ARE ENGAGED I'M JUST SO HAPPY FOR MY BBS UGGHHHH MY HEART IS TOO SOFT FOR THIS," one fan reacted to the news of the couple's possible engagement.

Neither Cara nor Ashley has responded to the engagement rumors. Meanwhile, Ashley's mother Shannon Benson seemed to weigh in on the news by posting on Instagram, "How easy it is for so many of us today to be undoubtedly full of information yet fully deprived of accurate information."

Cara and Ashley were first reported to be romantically linked in summer 2018, but it's not until last month that they made their relationship Instagram official. Last June, Cara shared on Instagram a video of them passionately kissing to celebrate Pride Month.