The 'Down To The Honkytonk' hitmaker has been met with disgusted reaction from one social media follower after he shared a video of him covering Cher's 'Believe' in celebration of Pride Month.

AceShowbiz - Country star Jake Owen has offered to give a homophobic fan a backstage hug after she expressed her disdain at the singer's support of the LGBTQ community.

The "Down To The Honkytonk" hitmaker marked the anniversary of the start of the gay rights movement during Pride Month by teaming up with his band leader Lukas Bracewell in the studio to record a cover of Cher's "Believe" hit.

Jake posted video footage of the country-tinged performance on Instagram on Tuesday, June 25, alongside a lengthy message about love and acceptance for all.

"I believe #loveislove," he began. "Some of my closest friends and coworkers are part of the #lgbt community and I couldn't be more happy for the progress they have made. I'm inspired by people loving people no matter who you are. I BELIEVE the world needs more love. No matter where it comes from."

"So with that said, I googled 'gayest' songs of all time and the boys and I decided to put our country spin on Cher's 'Believe.' Hope you dig. I plan on releasing all of these backstage random songs we've created very very soon. Stay tuned friends, and most importantly, love everyone."

Most fans flooded Jake's comments section with words of praise and admiration, but it was a remark from one disgusted follower from Virginia which caught the musician's attention.

"Suddenly I feel sick that I have tickets to your show here on Thursday night," the self-confessed "Bible-believing follower of JESUS CHRIST" posted.

Choosing to respond to the hater with kindness, Jake replied, "I'm sorry you feel sick that you have tickets to my show Thursday night. Maybe it would do you good to come out, smile, laugh, sing along with a bunch of strangers that are all going through what we call 'life...' It's really only you and few other ignorant people that make yourself look silly."

He then offered to give the woman a hug if she decided to attend the concert, remarking, "You need one." 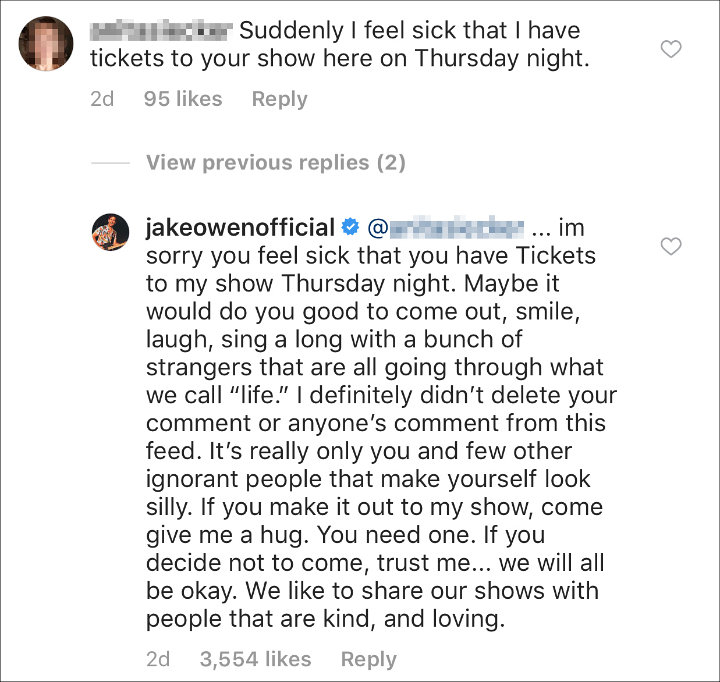 Jake Owen clapped back at an anti-LGBTQ fan.

"If you decide not to come, trust me... we will all be okay," he added. "We like to share our shows with people that are kind, and loving."