Despite her assurance that she is fine, the former 'NCIS: Naval Criminal Investigative Service' star is missing from the 'Broke' cast line-up when CBS introduced the new comedy series to the press.

AceShowbiz - Actress Pauley Perrette has assured fans she is fine after sharing a photo of herself in a hospital bed.

The former "NCIS: Naval Criminal Investigative Service" star took to Twitter early on Thursday, May 16 to reveal she had spent the night under doctors' care.

"Well this was my night!" she captioned the picture, which showed Perrette in a hospital gown while hooked up to an intravenous drip and a heart monitor.

"No worries, clean bill of health," she added. "Just a chance to wear a beautiful gown!". 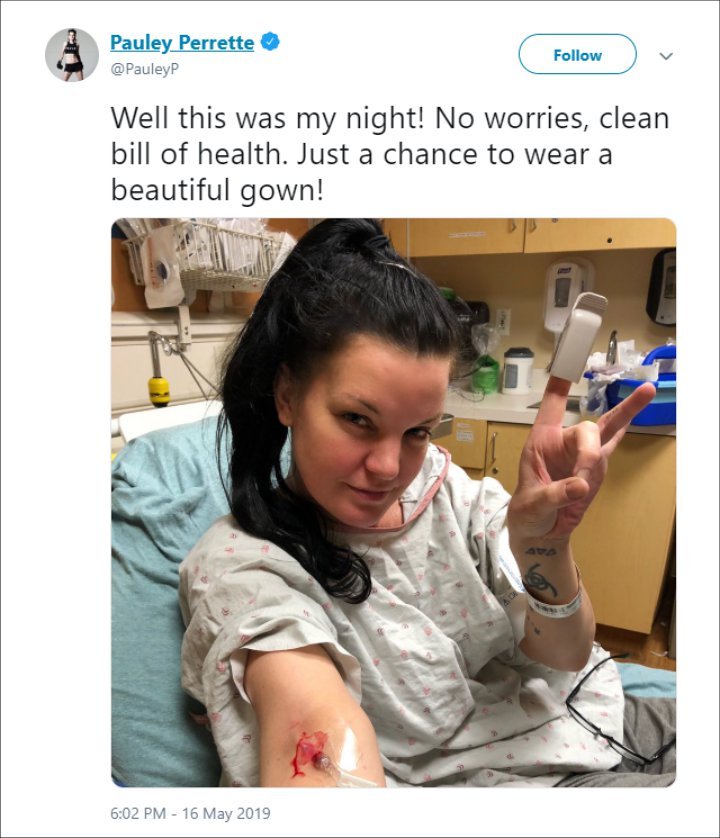 Pauley Perrette shared a selfie from the hospital on Twitter.

The actress stopped short of explaining what had prompted her hospital visit, but the post sparked a flurry of get well soon messages from her fans.

The news of Perrette's overnight stay emerges as she prepares for her return to TV in new comedy series "Broke", a year after quitting "NCIS" following a 15-year stint as forensic specialist Abby Sciuto.

She was noticeably missing from the cast line-up in New York City on Thursday as network officials at CBS officially introduced the show to the press during their upfront presentation.

Pauley Perrette Paralyzed on Half of Her Body Following 'Massive Stroke'

Pauley Perrette 'Grateful' to Be Alive One Year After 'Massive' Stroke