'I have NEVER been paid a dime from my sister,' stresses the former 'Zoey 101' star after her sweet post in support of the 'Toxic' hitmaker drew negative comments online.

AceShowbiz - Jamie Lynn Spears fired back at social media trolls after her sister Britney Spears appeared in court on Friday, May 10.

The "Toxic" hitmaker, who recently finished a stint at a treatment centre, arrived at a Los Angeles courthouse on Friday, May 10 holding hands with her mother, Lynne Spears, as they attended a conservatorship hearing.

Jamie Lynn posted a sweet photo of Britney on Instagram in support of her big sister, but was forced to put one commentator in their place after she was accused of taking money from the popstar.

"Fear of losing your allowance, I see!" one Instagram user wrote, prompting the 28-year-old to respond, "haha nice try, but I have NEVER been paid a dime from my sister. that is HER hard earned money, and I am NOT entitled to a cent of it. I would no (sic) spend money I did not earn." 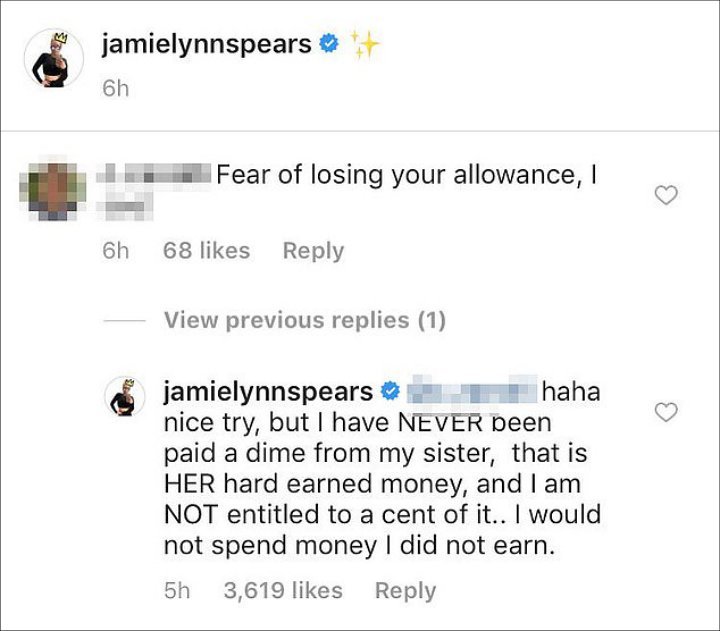 Jamie Lynn Spears hits back at an Internet troll accusing her of taking money from her sister Britney.

"So, it's been a minute since I've done one of my Tom Boy Talk videos because there's been a little 's' going down," the singer and TV star said.

The video then slowed down while Gwen Stefani's track "Hollaback Girl" started playing, specifically the lyrics, "This s**t is bananas."

"But I'm back because I didn't forget about y'all and the topics that you've submitted," Jamie Lynn continued.

While Britney's hearing was closed to reporters, a source told People that the judge ordered an expert evaluation. The mother of two reportedly asked for certain freedoms under her conservatorship, but the judge didn't grant that request, the outlet reports.

Her mother Lynne previously filed a legal motion earlier this month asking to have more access to information about her daughter's conservatorship.

Britney's father Jamie Spears, who became a permanent conservator of his daughter's affairs in 2008, is currently recovering after suffering a ruptured colon last year (2018).

Jamie Lynn Spears: Being Competent Mother Has Nothing to Do With Age