After debuting her rendition of Frankie Beverly & Maze's 1981 anthem in Netflix's 'Homecoming', the 'Formation' singer makes use of her Instagram Stories to promote the #BeforeILetGoChallenge.

AceShowbiz - Beyonce Knowles has launched a viral dance challenge inspired by her new cover song "Before I Let Go".

The singer surprised fans by releasing the "Homecoming" live album on April 17, the same day as Netflix dropped her "Homecoming: A Film by Beyonce" special, which featured her headlining performance at Coachella 2018 as well as behind-the-scenes footage. In the closing credits of the documentary and on the album, Beyonce debuted a new song "Before I Let Go" - a cover of Frankie Beverly & Maze's 1981 black cultural anthem.

The track has now sparked a new viral dance challenge, with dancers showing off the routines they've created to the song, which features directional lyrics such as, "Ooh, bunny hop, bunny hop, drop, pop/ Cross your legs, turn around and clap/ Shuffle to the left, let's glide now/ Ooh, drop it down, drop it down low, low."

Beyonce launched the #BeforeILetGoChallenge on her Instagram Stories on Monday by promoting the hashtag with a bee and heart emoji. The singer, who rarely uses that Instagram function, also shared dozens of video submissions from dancing fans showing off their moves. 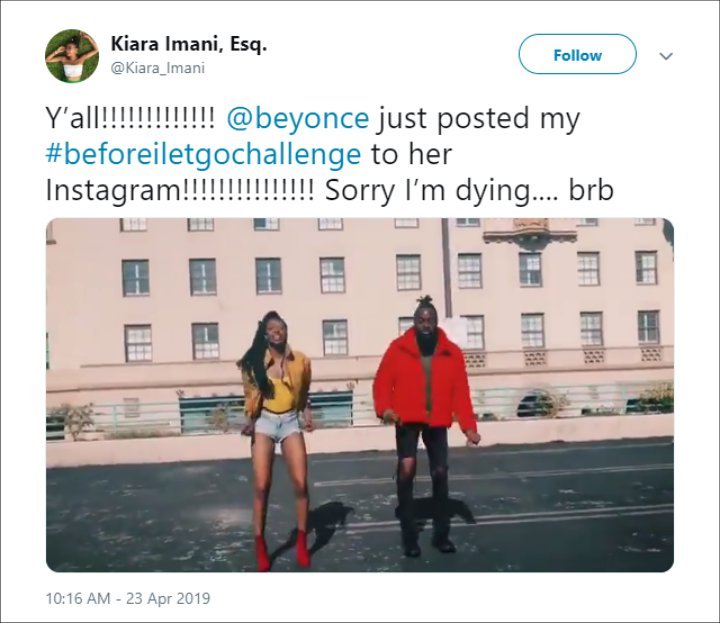 Beyonce dropped the "Homecoming" album on all streaming services - including Spotify and Apple Music - on Wednesday, a rare move for the singer who usually shares her new music exclusively on husband Jay-Z's TIDAL service.

She is now following suit with some of her other work - bosses at Spotify and Apple Music announced on Tuesday that her 2016 album "Lemonade" is now available on their platforms, three years after its release.