The trio plays a private concert in Tina Belcher's bedroom for the character and her siblings Louise and Gene in the new music video.

AceShowbiz - Sleater-Kinney joins forces with the creator of "Bob's Burgers" for the official music video of their new song, "A New Wave". The clip, released online on Thursday, February 19, features the cartoon version of the band's members rocking out with the kids of the Belcher family.

The three ladies, Corin Tucker, Carrie Brownstein and Janet Weiss, play a private concert in Tina Belcher's bedroom while the character dances along with her siblings Louise and Gene. Also making cameos in the video are the Belcher parents, Bob and Linda.

"A New Wave" appears on "No Cities to Love", Sleater-Kinney's newest album that they put out last month. Its video follows the clip for the LP's title track that features appearances from a number of their famous friends including Sarah Silverman, Andy Samberg, Norman Reedus, Fred Armisen, Vanessa Bayer and Brie Larson.

To promote their first album since 2005's "The Woods", the ladies have been playing shows on their new tour that opened earlier this month in Spokane, Washington. 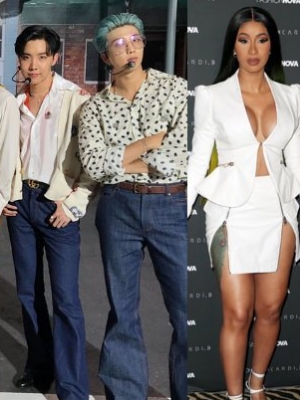