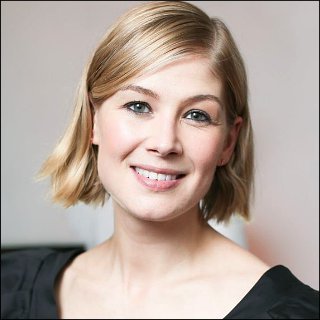 There is certainly something more than a mere stunning look or gorgeous figure of Rosamund Pike that enable her to shine under the spotlight with her growing status as a fine actress. Probably one the most potential starlets in Hollywood film industry, she has compiled an excellent list of acting experience which she has developed carefully for years since her teens. Born on January 28, 1979 in London, U.K. as the only child of a professional opera singer and concert violinist, she undoubtedly inherits the love for performing arts from her parents, Julian and Caroline Pike. Preferred another branch, which is acting instead of following their trails, the young girl was brilliantly accepted into National Youth Theater at the age of 16.

Eventually gained her first leading role in "Romeo and Juliet" there, eighteen-years-old Rosamund caught the attention of an agent named %cDallas Smith% who later raised her confidence of the brilliant talent she possesses. Supported by Smith, she then started to build a professional acting career, joining the cast of BBC TV movie of "A Rather English Marriage" (1998) alongside %cAlbert Finney% and %cJoanna Lumley%. Already became an English Literature student at the prestigious Oxford University's Wadham College, this mesmerizing actress was also involved in its stage production of "The Taming of the Shrew" which brought her abroad to tour around some theaters in Japan for about six weeks.

The following year saw Rosamund portraying a challenging character called Lady Harriet Cumnor in BBC's miniseries based on Nancy Mitford's novel, "Wives and Daughters." Her enactment delightfully was praised by critics, including from Vanity Fair which commented her of being "stood out like a banner snapping in the wind." In the meantime, she kept polishing her skills in theatrical performances at the prestigious Oxford Playhouse, appearing in "The Libertine," "All My Sons," and "Rhinoceros." Back to the small screen, the beauty once again was included in another BBC's miniseries, "Love in a Cold Climate" (2001), opposite %cChristian Coulson% while successfully earning her Bachelor of Arts degree with Magna Cum Laude from Wadham.

It was not until "Die Another Day" (2002) that Rosamund ultimately received wider recognition all around the world. Convincingly portrayed a double agent named Miranda Frost in this 20th James Bond film, she managed to obtain an MTV Movie Awards nomination for Best Trans-Atlantic Breakthrough Performer in 2003. Still in the same year, the green-eyes actress returned briefly to theater, appearing in %cTerry Johnson%'s "Hitchcock Blonde" at London's West End before returning to the big screen to film "Promised Land" (2004) and "Doom" (2005). Only a month after the latter's release, there came her more high-profile vehicle of "Pride and Prejudice", which gloriously scored four nominations at the 2006 Oscar, followed by "The Libertine" (2006) opposite %cJohnny Depp%.

The bright critical success of "Pride" more or less arguably smoothened Rosamund's path in the movie industry as handfuls of titles were afterwards lined up for her to undergo for the two years ahead. Happily engaged to "Pride" helmer Joe Wright in 2007 after previously dated the period drama's star %cSimon Woods%, she then was spotted in "Fracture" and "Fugitive Pieces" during the same year, in the meantime lending her voice in "Jackboots on Whitehall" as well as playing the young version of the titular character in Marc Evans-directed "Caitlin", both for 2008 releases. Looking on the progress she has made to this point, her star would likely display its sparkling radiance for a long time then.