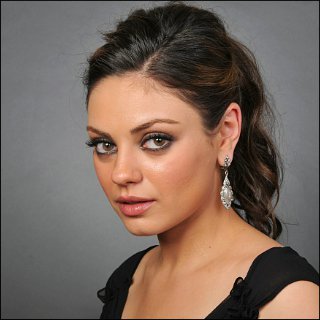 Having an interest in acting since she was a kid, Mila Kunis began appearing on several television series and commercials as novice. She then snatched her first major role on the sitcom "That '70s Show", playing the main character of Jackie Burkhart. She received multiple award nominations and won three of them. In 1999, she was billed to lend her voice to Meg Griffin of the animated series "Family Guy" and continued taking on guest spots on other features, such as "MADtv", "Robot Chicken", "The Cleveland Show", "Sesame Street", and "Two and a Half Men".

Kunis began appearing in film since mid 1990s, but it wasn't until 2008 that she earned her breakthrough role that was as Rachel Jansen in romantic comedy drama "Forgetting Sarah Marshall". The part brought her a nomination for Choice Movie Breakout Female Teen Choice Award. This was followed by several other parts in notable films, like "Max Payne", "The Book of Eli", and "Friends with Benefits". Among the many characters she portrayed in those flicks, it was her starring role as Lily in the 2010 "Black Swan" that earned her worldwide recognition. It, moreover, won her four nods, namely Marcello Mastroianni Award, Oklahoma Film Critics Circle, Saturn Award, as well as Scream Award.

In 2012, Kunis could be seen starring in the commercially success comedy "Ted" as Lori Collins. The following year, she had three different projects, namely "Oz the Great and Powerful", "Blood Ties", and "Third Person". She was then signed to lend her famous figure to "Annie" (2014), "Hell & Back" (2014), also "Jupiter Ascending" (2015).

Kunis was born Milena Markovna Kunis on August 14, 1983 in Chernivtsi, Chernivtsi Oblast, Ukrainian SSR, Soviet Union, which has since become Ukraine. She began dating actor Ashton Kutcher in early 2012 and got engaged to him in February 2014. In September the same year, she gave birth to their daughter, Wyatt Isabelle.