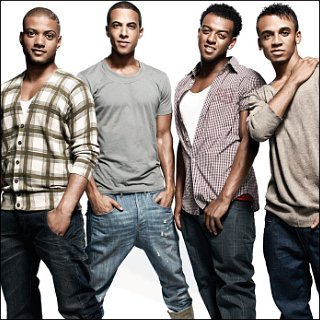 %cJLS% a.k.a Jack the Lad Swing are a four-piece boyband. This group were formed around 2007 under the name of UFO (Unique Famous Outrageous). The four members of the band had their own story when it came to what they did before joining the JLS.

%cOritse Williams% started competing in various talent contests since he was 14. In order to get his first break in the industry, he worked for free at a %cP. Diddy%- inspired internship at Deal Real Records. By a chance, he ran into DJ %cTrevor Nelson% and his talent was recognized as he was asked by Trevor to perform his own original song at the end of MTV's show "The Lick".

%cMarvin Humes% was no stranger to the spotlight. He had appeared in several events taking place in such venues as Holby City and Grange Hill while he was still at junior high school. Years later, he was signed to Innocent Records as part of %cSimon Webbe%-formed band %cVS%. After the group broke up, he moved on to property business before being asked to join JLS.

%cAston Merrygold%, the youngest of the JLS, left school at the age of 16 and worked as a presenter for CITV's TV show "Fun Song Factory" for 3 years. He moved to London shortly afterwards in the hope of pursuing a singing career. While auditioning from one talent show to another, he became friends with Marvin.

The last member of JLS is %cJonathan Gill% who was known as JB. He spent the first 5 years of his life living in Antigua, discovering his musical talent at a very early age. After completing his exams at university, he decided to audition for "The X Factor" in 2007. It was at this point that JB came into contact with the other members of JLS.

JLS auditioned for the fifth season of the U.K. singing competition in 2008. Throughout the contest, their performance received mixed comments from the judges. When they sang a rendition of %cBritney Spears%' "Baby One More Time", they got harsh critic from Simon Cowell.

However, Simon changed his critic to a favorable comment when they delivered %cLonestar%'s "I'm Already There". He said at that time, "I'm gonna make a prediction, you could actually win this competition." JLS gained the most votes in the show's semi-finals. Unfortunately they lost the winner title to %cAlexandra Burke% on its finale.

Post graduating from "The X Factor", JLS were signed to Epic Records. They released their debut single "Beat Again" in 2009. With this song, they sat at number 1 on U.K. Singles chart. They also prepare for their first studio album.