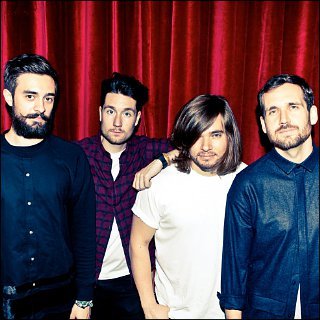 Bastille was originally a solo project by singer/songwriter Dan Smith before it eventually turned into a four-piece band. The group consisted of Dan on the lead with his three other pals Chris Wood, William Farquarson and Kyle Simmons.

They made their debut in June 2010 with their limited edition 7"/45 rpm single featuring the two tracks "Flaws" and "Icarus". They received a great amount of attention from media and fans on YouTube and MySpace and eventually landing a deal with Virgin Records.

Before releasing a full-length album, the band dropped an EP "Laura Palmer" in 2011. As their popularity grew, they secured slots at major U.K. festivals including Glastonbury, the Isle of Wight and Blissfields. Their music has also been used on TV show "Hollyoaks".

Their first major release came in 2012 with single "Overjoyed", followed by the title track of the band's first studio album, "Bad Blood". They were dubbed "New Band of the Day" by the Guardian, and their single "Flaws" especially became their first Top 40.

The album finally came out in March 2013 and placed at number one in the U.K. Albums Chart. On top of that, they shot to the second place on the single chart with their fourth single "Pompeii". This landed them a spot at Reed and Reading Festival and an opening slot for Muse's tour.

A few months later, they re-released their album with a new title "All This Bad Blood". For the lead single, they mashed up songs "The Rhythm of the Night" by Corona and "Rhythm Is a Dancer" by Snap!. The single debuted at number two on U.K. Singles chart, and the band got four nominations at the BRIT Awards.

The re-release was to tide fans over while they're working on their sophomore set. "We just have some ideas, so while we're all back in London we're demoing some things, and they're quite promising," Farquarson said. "We like to try and stay busy, and when you're touring as much as we are we don't want to let the creativity become muted."

"We all love recording. Dan (Smith) loves to write and we love to get in the studio and do some stuff. So I think it's good whenever we're back in London to make sure we're busy writing new stuff to keep the creative muscles exercised."