The 'Shang-Chi and the Legend of the Ten Rings' actor has condemned the horrifying mass shooting that occurred on a Lunar New Year celebration in California.

"This is what it feels like to be Asian American today, SWAT teams and red lanterns. It's what we all saw as we waited for details to unfurl surrounding the horrific shooting in Monterey Park that left 10 people dead and many injured," he wrote while sharing a photo of two armed police officers in a street decorated for Chinese New Year.

"A shooting in the wake of the Lunar New Year? In the pits of our stomachs, we felt fear of the very real possibility that this could have been a hate crime committed against our community. Was that so far fetched? Asian Americans continue to be attacked on the streets, so much so that many local police departments have set up dedicated hate crime units. Seeing these images stirred up our worst fears and made us feel unsettled and unsafe."

The gunman has been revealed as an elderly Asian immigrant, who also took his own life as police approached. Simu continued, "As more details emerged about the shooter, a 72 year old Asian man, we feel no sense of 'relief.' People are dead, and a community is still in mourning."

"This is what it feels to be Asian in America today, during what should have been a joyous time. We are confused, sad, and heartbroken for the families of everyone affected by this senseless act. Please have compassion for us as we sort through it all."

The "Shang-Chi and the Legend of the Ten Rings" actor also reflected on the tragedy on Twitter. He wrote, "For those who are unfamiliar, Monterey Park is a city in LA County that is majority AAPI. It's home of Asian American families, parents, grandparents, siblings, sons and daughters, aunts and uncles." 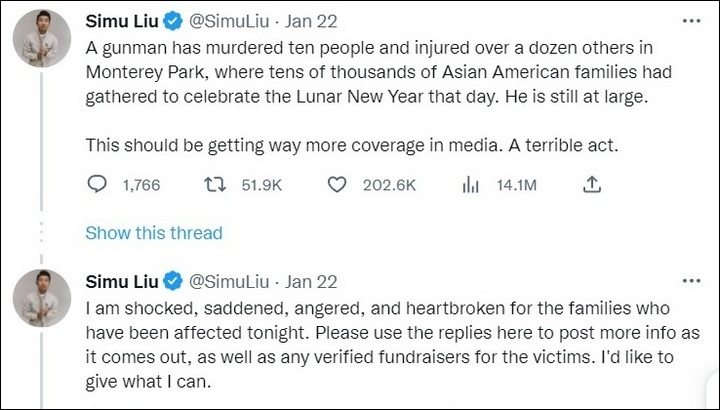 "All of whom were looking forward to celebrating the New Year this weekend. I am shocked, saddened, angered, and heartbroken for the families who have been affected tonight."

Simu Liu Slams Quentin Tarantino's Anti-Marvel Comments: You Don't Get to Point Your Nose at Me