The 'Pretty Woman' actress wears a dress with framed photos of her frequent collaborator all over it, while George's longtime pal Matt Damon playfully teases his 'Ocean's Eleven' co-star at the event.

AceShowbiz - Julia Roberts was George Clooney's biggest fan at the 45th Annual Kennedy Center Honors which was held in Washington D.C. on Sunday, December 4. Honoring her close friend and frequent collaborator, the "Runaway Bride" star showed her support for that night's honoree with her dress.

The 55-year-old actress wore a long black gown under a small black jacket that ended in the middle of her black. Her customized gown was covered in framed photos of her "Ticket to Paradise" co-star. She was joined by her longtime husband Daniel Moder at the suave affair. 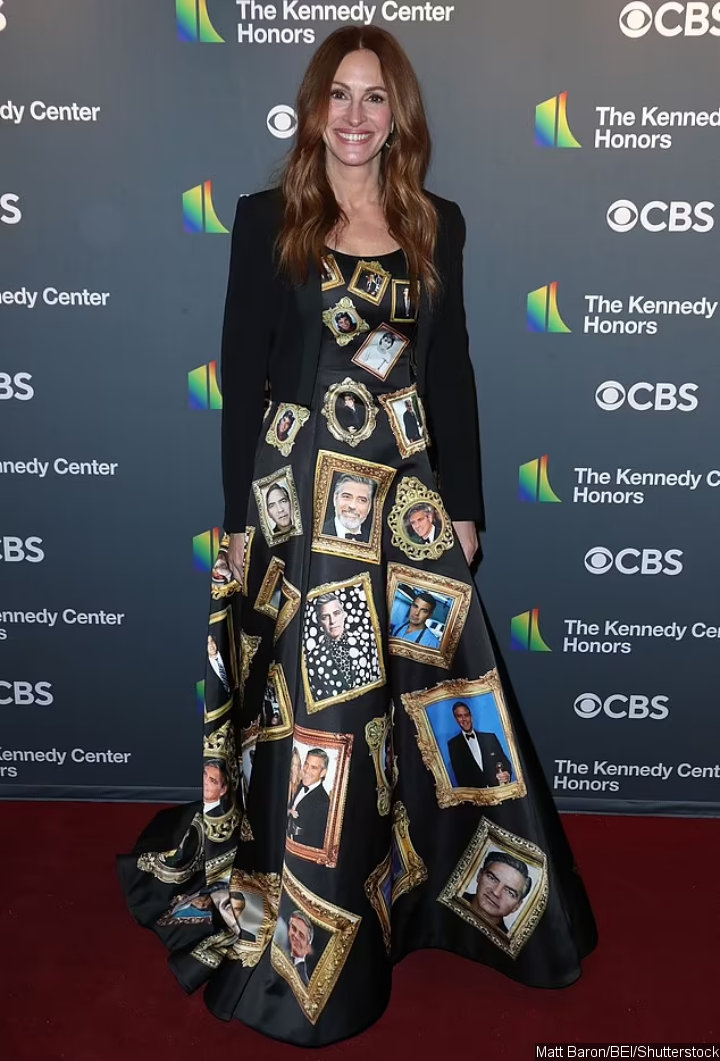 Julia Roberts wore a dress with photos of George Clooney all over it at Kennedy Center Honors.

Inside the event, Julia changed into a more toned-down ensemble, an all-black pantsuit. She showed a little PDA with her cinematographer husband, holding his waist from behind while she stood next to Matt Damon.

Julia also led a tribute to George. After an introduction that alternated between funny and heartfelt, she turned to a set designed to look like a smoky bar, the type the "ER" alum might enjoy.

Matt playfully teased his "Ocean's Eleven" co-star by telling a funny story of how the 61-year-old once stole then-President Bill Clinton's stationery and wrote notes to fellow actors on it. Don Cheadle raved over George's philanthropic work.

George, who came with his wife Amal, was earlier worried that his tribute would be more of a "roast" with his pals in attendance. He was feted that night along with Gladys Knight, Amy Grant, composer Tania Leon and the band U2.

President Joe Biden praised them before a star-studded East Room crowd as an "exceptional group of artists." He said, "Thank you for showing us the power of the arts and 'We the People'."

The president highlighted George's on-camera work and off-screen charity endeavors, from helping 9/11 victims' families to supporting a gun control campaign led by the survivors of the Parkland school shooting. "He is unrelenting and undaunted," he said of the actor. "That is character in real life. And that is George Clooney."

Julia Roberts' Mind 'Blown' After Learning She's Not a 'Roberts'