It's also reported that the 'Big Big Beat' femcee, along with a Latina woman, attacked a process server when the staff was ordered to 'serve' the legal complaint to her.

AceShowbiz - Azealia Banks seemingly continues facing financial problems. The 31-year-old rapper and singer may be homeless this winter after she's evicted from her rented property in Miami.

Internet sleuths discovered that the "Big Big Beat" hitmaker attempted to evade a process server who was supposed to deliver the court-ordered eviction notice, which was filed in November. According to the documents, her Miami landlord asked to evict the raptress from an apartment that she's renting.

The landlord further claimed that Azealia is not paying her rent and the anonymous landlord filed legal documents to have her removed from the apartment. "Plaintiffs, by and through the undersigned attorney, sue Defendant, AZEALIA BANKS, and any unknown tenants and alleges: This is an action to evict Defendant, a tenant, from the real property in Miami-Dade County, Florida," read the legal documents.

"Upon arrival, there were no vehicles parked in the driveway of the residence," the process server's narrative read. "I explained the nature of my visit and inquired after the subject, Azealia Banks or other residents, but the [unknown Hispanic female] was immediately uncooperative and did not answer my questions, ultimately slamming the door in my face and demanding I leave immediately."

"As I returned to my vehicle, Doe exited the property and began shouting at me, saying, 'You think you're going to go through my friend's trash and get away with it?!' " the process server continued. "I again advised Doe that I was a process server attempting to serve a summons and Doe began taking video and photographs of me and my vehicle."

The process server went on revealing that when they re-entered their vehicle to leave the area, "Doe approached my door and took photos of me with her cell phone. At the same time, I was sprayed in the face with a fire extinguisher." They further recalled, "I immediately exited my vehicle and observed Doe and an unknown black female running back into the home while laughing." After they contacted the Miami-Dade Police Department, it's unveiled that "the black female" was Azealia.

Prior to being slapped with the court-ordered eviction notice, Azealia revealed on her social media that she's finally able to purchase her dream home. Along with a photo of her posing in front of the house, she wrote in May, "AZEALIA F**KING BANKS GOT THE MANSION!!!! WE DID IT JOE!!!" 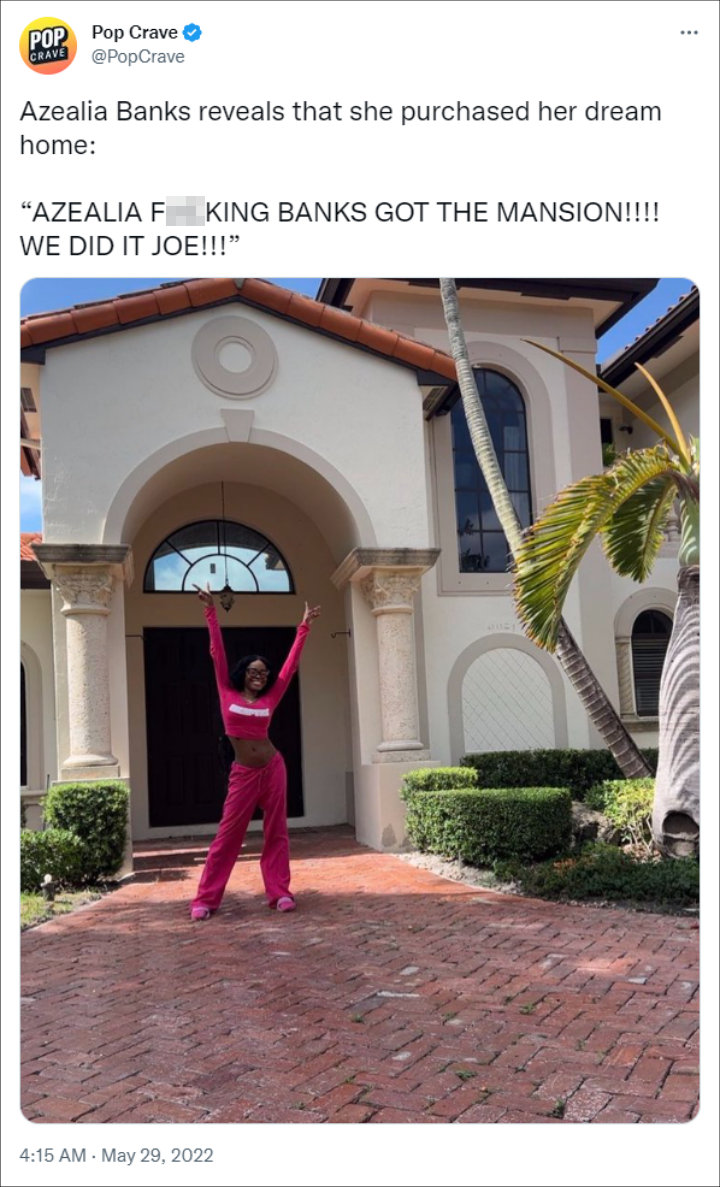 Azealia Banks claimed she purchased her own house in Miami in May.

Azealia has a claimed net worth of $3 million, according to Celebrity Net Worth. In April 2019, the Manhattan-born hip-hop artist was served with lawsuit documents over her credit card debt. She was handed the papers by a New York City process server outside her New York apartment building. The documents suggested she was picking up a parcel delivery and gave her name to the driver, allowing the server to swoop in.

It took City National Bank officials over a year and a half to serve Azealia after they alleged that she had failed to pay off $137,000 in credit card debt. The bank bosses accused the "212" femcee of opening up two credit card accounts with them and then ceasing payments on the debt in 2016.