Lizzo, Chris Brown, Jazmine Sullivan as well as Bruno Mars and Anderson .Paak's Silk Sonic are also among the winners at the event, which was filmed at the Orleans Arena in Las Vegas last month.

AceShowbiz - Beyonce Knowles was the big winner at the 2022 Soul Train Awards. The "CUFF IT" singer was honored with three top prizes at the pre-taped ceremony, which was filmed at the Orleans Arena in Las Vegas last month, but aired over the weekend.

"Renaissance" was crowned Album of the Year, "Break My Soul" landed Song of the Year and "Make Me Say It Again, Girl" with Ronald Isley and The Isley Brothers was named Best collaboration. Lizzo, Chris Brown, Jazmine Sullivan and Bruno Mars and Anderson .Paak's Silk Sonic were also among the winners.

Mary J. Blige was this year's recipient of the Certified Soul Award. The bash kicked off with a breathtaking performance from Muni Long (Priscilla Renea) of her Grammy-nominated breakout hit "Hrs and Hrs" followed by "Plot Twist". Ari Lennox also took to the stage to perform "Waste My Time". Comedian Deon Cole hosted proceedings.

As "Renaissance" dominates awards season, it was recently alleged that "Renaissance" act II is an acoustic LP and act III is a collaboration with her husband Jay-Z.

New York Times journalist Kyle Buchanan made the claims on Twitter this month, just in case the micro-blogging app vanished amid speculation the site was shutting down. He wrote, "Before Twitter goes down, instead of making you follow me somewhere else, I'll just tell you what I've heard about the other 2 acts of Beyonce's 3-part "Renaissance" project "(2nd act is an acoustic album, 3rd act is a collaboration with Jay-Z) (sic)" 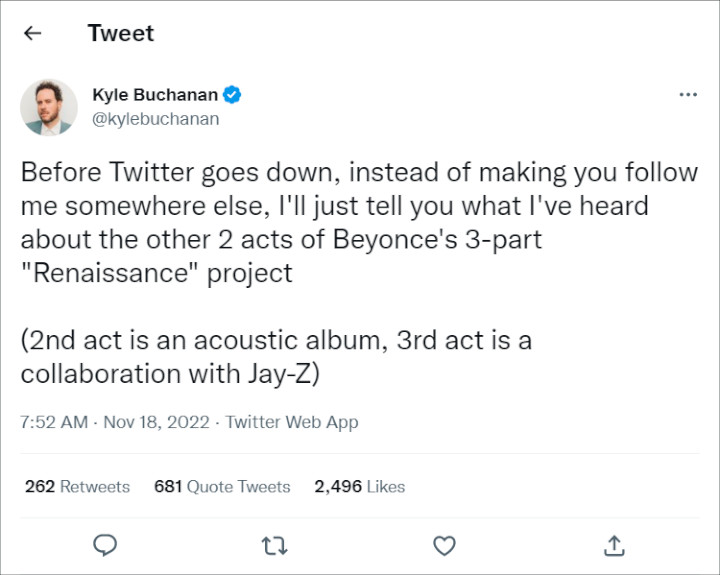 The "Crazy in Love" singer is yet to announce the next two parts of the three-part project. She's received nine GRAMMY nominations for the first act. The 41-year-old superstar - who is now tied with husband Jay-Z as the most-nominated artist in the history of the awards with a total of 88 each - enjoyed a career comeback with the chart-topping lead single, "Break My Soul", and record, including the prestigious Album of the Year and Song of the Year prizes.

Beyonce is also reportedly planning to hit the road in 2023 for a "Renaissance" world tour. The "Love On Top" singer last toured in 2018 when she hit the road with her husband after releasing their joint album "Everything Is Love".

An abridged list of the Soul Train winners is as follows: