The 'Ric Flair Drip' emcee's concerning social media posts arrive five months after he lost his mother Leslie Joanne Wayne, who was killed by her husband before he took his own life.

AceShowbiz - Is Metro Boomin doing alright? The "Space Cadet" rapper has sparked concern among his fans after he shared a series of cryptic messages on his social media platform, one of which stated that he's "dying slow."

On Sunday, November 27, the "Ric Flair Drip" spitter turned to his Instagram Story to seemingly express what he really felt. "Everyday I feel like I'm dying slow.. not living just existing until the day God calls me back home to…," he wrote, adding a bunch of broken heart emojis. "My brothers and sisters are really my light idk where I would be without them."

In the following slide, Metro, whose real name is Leland Tyler Wayne, added a photo of a book, featuring some Bible verses. "A life of praise and thankfulness becomes a life filled with miracles. Instead of trying to be in control, you focus on Me and what I am doing. This is the power of praise: centering your entire being in Me," read one pink-highlighted part, "Enjoy abundant life by overflowing with praise and thankfulness."

Metro also highlighted Colossians 3:15 which read, "Let the peace of Christ rule in your hearts…And be thankful." Despite quoting the Bible verse, the 29-year-old rapper/record producer wrote in the following post, "The devil be working hard boy I swear." 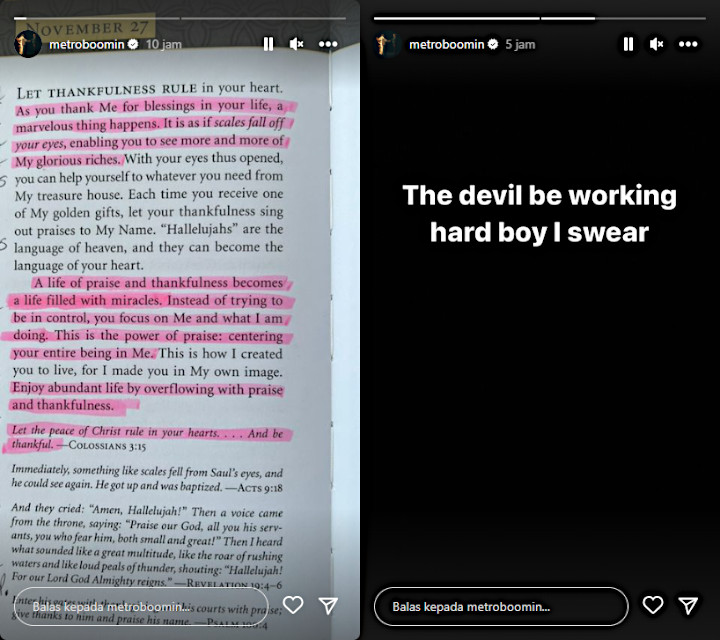 Metro's cryptic social media posts came five months after her mother Leslie Joanne Wayne tragically passed away. It's reported that she was discovered just outside of the Atlanta area after she was murdered by her spouse, not Metro's father. The killer allegedly committed suicide afterward.

In August, Metro lamented in a social media post about saving his mom. "This don't even feel like real life no more it's like a nightmare that never ends and starts over every time I wake up," he expressed his frustration on Instagram Story. "My mom was and still is my best friend in the universe and anybody who really know me know I've always been a momma's boy my whole life. This gotta be what hell feel like cause it's like my soul just burning and everything around me constantly burning."