The 'God Is a Woman' hitmaker turns to her social media platform to show some love to the self-anointed 'Queen of Christmas' after the latter got roasted for her 'lazy' performance.

AceShowbiz - The queen is supporting another queen. Ariana Grande has shown support to Mariah Carey after the latter was roasted on social media over her performance at Macy's Thanksgiving Day Parade.

Making use of her Instagram Story on Friday, November 25, Ariana reposted snapshots from Mariah's photoshoot with W Magazine. The "God Is a Woman" hitmaker first re-shared a black-and-white image that saw Mariah posing with one of her hands placed on top of her head. "All We Want for the Holidays Is Mariah Carey," the magazine cover titled.

Not stopping there, Ariana also re-uploaded a photo of Mariah wearing a white tank top, a pale beige skirt and a furry jacket. Underneath the picture, the "Dangerous Woman" hitmaker wrote, "i'm faint." 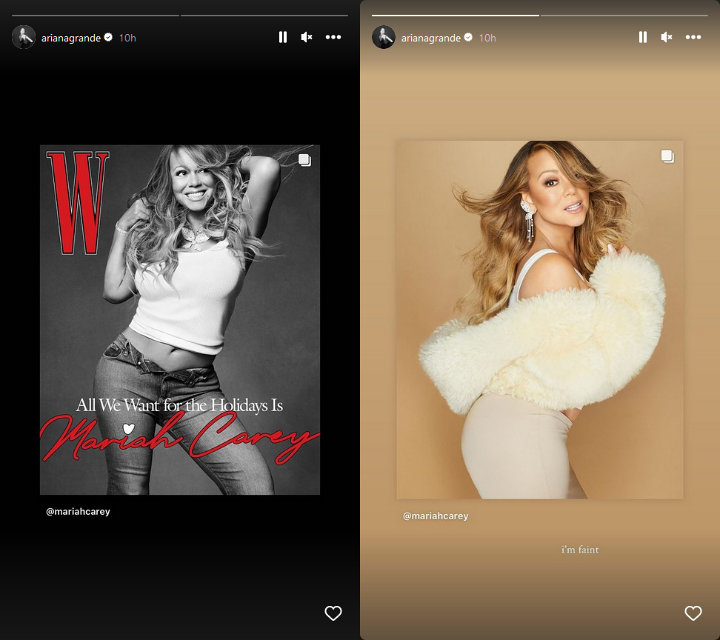 Ariana's support came shortly after Mariah was dragged online for her performance at Macy's Thanksgiving Day Parade. The self-anointed "Queen of Christmas" was joined by her 11-year-old twin children Monroe and Moroccan on stage.

Many accused the ex-wife of Nick Cannon of lip-syncing the performance of her iconic song "All I Want for Christmas". One person called her out on Twitter, "Come on lip sync." A second wondered, "Why lip sync tho??" Someone, however, came to the "Hero" hitmaker's defense as claiming, "If you watched the parade, EVERYBODY lip synced."

Others, in the meantime, criticized Mariah for her "lazy" performance. "I love the lack of energy Mariah Carey gives in her performances. It's the one thing we can all count on," one Twitter user sarcastically wrote. Another chimed in, "Lmao Mariah Really getting paid to mouth word a real Diva."

Sports journalist Ian Hest weighed in, "Mariah Carey is getting millions right now to just stand there with her umbrella and honestly I'm not mad. Mad respect." Not bothered by the lack of energy in Mariah's performance, someone else said, "She always just standing there with a beautiful gown doing absolutely nothing lol. I liveeeeee for that can't be mad."

Despite receiving backlash, Mariah said she was "proud" to join the annual celebration. "Happy Thanksgiving!!!" she posted on Instagram after her performance along with several snapshots from the parade. "Grateful and so proud of my beautiful kids Roc and Roe, grateful for the lambily and for the precious moments in life. Now it's reaaaallly time!!!"