Calling her newborn baby 'the greatest gift in the world,' the 'Ridiculousness' co-host admits giving birth to her daughter via C-section is 'the scariest yet most rewarding day of my life.'

AceShowbiz - Chanel West Coast can now officially add mother to her resume. The TV personality has welcomed her first child, a baby girl, with her boyfriend Dom Fenison. She gave birth to her daughter via Cesarean section after suffering "a few complications."

Taking to her Instagram Story on Wednesday, November 2 to break the news, the "Ridiculousness" co-host penned, "After many hours in labor I ended up giving birth to my baby girl via c-section. A few complications and she didn't wanna just pop out on her own."

The 34-year-old also gave a shout-out to her partner as she added, "Thank you @domfenison for giving me the greatest gift in the world and being such an amazing dad already. Love you both soooo much."

In a separate Story, Chanel gave a glimpse of her newborn baby daughter. The little girl was seen lying in the hospital baby crib while being wrapped up in a white blanket. "Our little nugget sound asleep," the new mom captioned it, along with stickers which read, "Welcome to the world" and "Delivery Day." 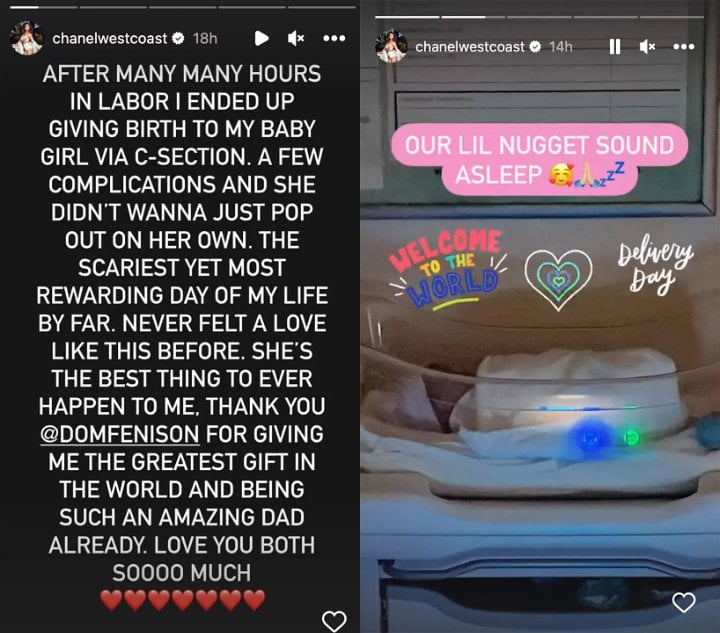 Channel, however, has not revealed the baby's name. The baby is the first child for both the reality TV star and her model boyfriend.

Channel first announced her pregnancy on June 2. Later in the same month, the couple revealed the sex of their first child in a cheerful video via Instagram. In the clip, the "Rob Dyrdek's Fantasy Factory" star can be seen jumping up and down in joy after her beau opened an umbrella that erupted in pink confetti.

"We're having a baby girl!!!" she wrote in the caption. "Love you @domfenison thank you for coming into my life and loving me the way you do."