Meanwhile, Parker Finn's horror movie 'Smile' outpaces Eichner's gay rom-com to debut at No. 1 on the inaugural weekend of spooky season at the domestic chart.

AceShowbiz - Billy Eichner is disappointed with the lackluster box office results of "Bros", but still "proud" of the movie. The comedian has vented his frustration after the Judd Apatow-produced gay rom-com bombs on its debut weekend, blaming homophobia for it.

Taking to his Twitter account to speak on the movie's commercial performance, the "Billy on the Street" star wrote, "Last night I snuck in and sat in the back of a sold out theater playing BROS in LA. The audience howled with laughter start to finish, burst into applause at the end, and some were wiping away tears as they walked out. It was truly magical. Really. I am VERY proud of this movie."

"Rolling Stone already has BROS on the list of the best comedies of the 21st century," he bragged, before pointing out the sad reality, "What's also true is that at one point a theater chain called Universal and said they were pulling the trailer because of the gay content. (Uni convinced them not to). America, f**k yeah, etc etc."

"That's just the world we live in, unfortunately," the 44-year-old lamented. "Even with glowing reviews, great Rotten Tomatoes scores, an A CinemaScore etc, straight people, especially in certain parts of the country, just didn't show up for Bros. And that's disappointing but it is what it is."

"Everyone who ISN'T a homophobic weirdo should go see BROS tonight! You will have a blast!" Eichner went on urging his fans, "And it *is* special and uniquely powerful to see this particular story on a big screen, esp for queer folks who don't get this opportunity often. I love this movie so much. GO BROS!!!" 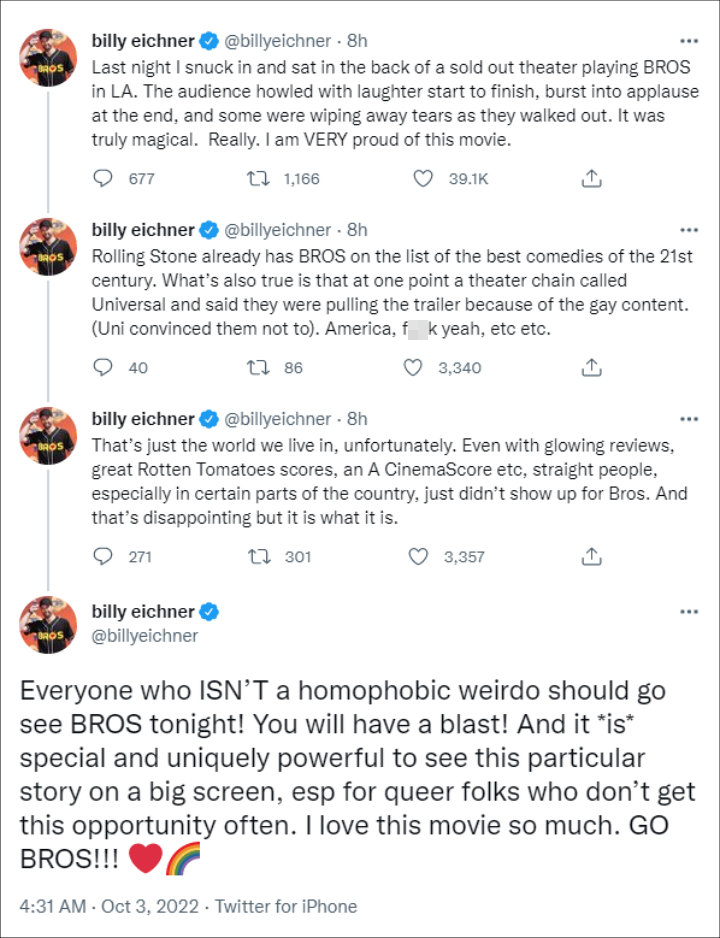 Directed by Nicholas Stoller, "Bros" enters the North American box office at No. 4 with an estimated $4.8 million. Though the movie carries a modest $22 million production budget, it will likely struggle to achieve profitability, considering its underwhelming opening gross.

True to Eichner's claims, "Bros" actually received glowing reviews from critics, with an approval rating of 91% based on 126 reviews on Rotten Tomatoes. Audiences polled by CinemaScore also gave the film an average grade of "A" on an A+ to F scale.

Also singing praise for "Bros" is Jim Orr, president of domestic distribution at Universal, who says, "Everyone who sees it absolutely loves it." He gushingly describes the movie as "heartwarming and hysterically funny."

While "Bros" positive reviews did not resonate with moviegoers, it's not the case with "Smile". The horror movie from Parker Finn successfully blasts to the top of the domestic chart with a solid $22 million, possibly benefiting from its viral, frightening marketing campaign. The marketing team last weekend planted smiling actors at baseball games around the country as a marketing stunt, which was largely covered by the media and spread on social media.

"It's remarkable, particularly when you take the budget into account. It's just a terrific result," says Chris Aronson, Paramount's president of domestic distribution. Paul Dergarabedian, senior media analyst for Comscore, also weighs in as saying, " 'Smile' just shows once again that the horror genre should be put on a pedestal by theater owners."

Elsewhere at the chart, Olivia Wilde's "Don't Worry Darling" slips to No. 2 with approximately $7.3 million, dropping more than 60% from its debut weekend. "The Woman King" also dips one place to No. 3 with an estimated $6.9 million, while "Avatar (Re-release)" remains strong at No. 5 with approximately $4.7 million.

Kylie Jenner Treats Fans to New Photos of Her Son