Taking to her social media account, the 'Bodak Yellow' hitmaker says that everyone, seemingly including Nicki Minaj, owes Stephanie Sibounheuang an apology for blaming her for the rapper's death.

AceShowbiz - Cardi B continues to defend PnB Rock's girlfriend who was accused of exposing the late rapper's location at the Roscoe's Chicken and Waffles restaurant in Inglewood, Los Angeles to the murder suspects. The "Bodak Yellow" hitmaker has urged people to apologize to Stephanie Sibounheuang after arrests were made.

On Wednesday, September 28, the New York native turned to her Twitter account to voice her opinion. She quote-retweeted a news headline that read, "The father and son duo were already in the restaurant's parking lot when PnB arrived, seemingly removing the possibility that PnB was targeted from a social media post from his GF showing they were eating at Roscoes."

In her message, Cardi, who had previously stated on Twitter she thought it was a stretch to think the shooters were following PnB Rock's partner on social media, wrote, "Told y'all……Yall must not know how the hood moves …. Y'all owe that girl a apology for the s**t y'all put her through knowing that she saw her baby dad die in her face." She then blasted so-called "social media investigators" as saying, "YALL SUCK!!!!" 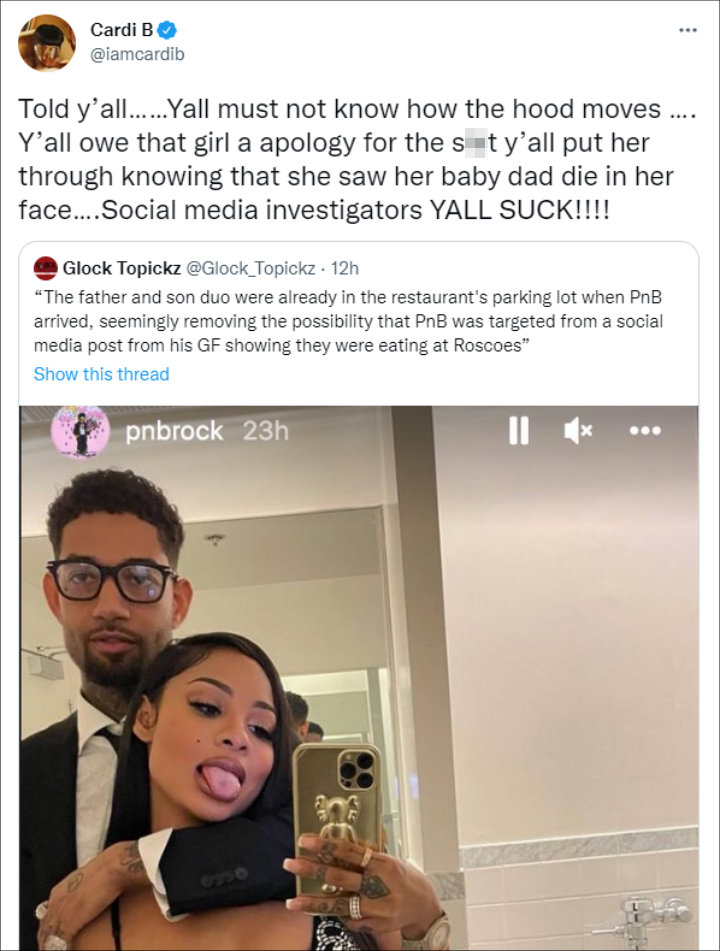 Among those who blamed Stephanie for PnB Rock's death was Cardi's nemesis Nicki Minaj. Calling out Stephanie on Twitter, the Trinidadian raptress wrote, "After Pop Smoke there's no way we as rappers or our loved ones are still posting locations to our whereabouts. To show waffles & some fried chicken????! He was such a pleasure to work with." She added, "Condolences to his mom & family. This makes me feel so sick. Jesus."

Defending Stephanie at the time, Cardi clapped back, "I highly doubt nikkas was looking at PMB's babymom IG. He was in a bad location and people stay outside plotting. It's very irresponsible and inconsiderate to blame her for something so tragic. We should be sending nothing but love to her and his family at this time."

PnB Rock was shot and killed on September 12 after a masked gunman entered the restaurant where he was eating with his girlfriend Stephanie and demanded items from the rapper. After shooting the 30-year-old Philadelphia rapper, the assailant left the eatery and fled in an awaiting vehicle.

So far, Los Angeles Police Department has arrested two murder suspects, a 17-year-old man and his alleged 38-year-old stepmother named Shauntel Trone. The arrests were made on Tuesday, September 27.

As for now, police are currently on the hunt for Freddie Trone, the father of the 17-year-old male, the one who allegedly shot PnB Rock. Freddie is believed to have driven the getaway car and has been labeled as "armed and dangerous" by the LAPD.