Social media users react to photos taken from the 'Aquaman' actress' vacation to Tel Aviv with her friends, during which she's also caught pushing an empty stroller.

AceShowbiz - Amber Heard is possibly making the most of her friend and social media users are taking issue with it. The actress has come under fire after she's accused of making her best pal Eve Barlow cut her food for her.

The chatter was sparked by photos from the "Aquaman" star's recent vacation to Tel Aviv. In one of the snaps shared on Twitter, the actress' friend Eve was seen using her cutlery on the food in front of Amber.

"Is Eve cutting Ahs food for her?" one user inquired in response to the photo. Another then chimed in by making assumption that Amber possibly "forced" her friend to "appease" her. "possibly sharing, but I wouldn't be surprised..," the second user replied. "as AH is with a [expletive] mood face, @Eve_Barlow probably felt 'forced' to appease the monster."

A third user further trolled the 36-year-old actress, "Does the next picture show Eve chewing the food and dropping it in Amber's mouth?"

The said photo was taken from Amber's trip to the city in Israel in August. In some other pictures, the "Pineapple Express" star was caught pushing an empty stroller. According to one Twitter user, she was also "spotted visiting a bookstore and enjoying lunch with controversial journalist and friend, Eve Barlow," who was kicked out of court for repeatedly taking her cellphone out during her defamation trial against ex Johnny Depp. 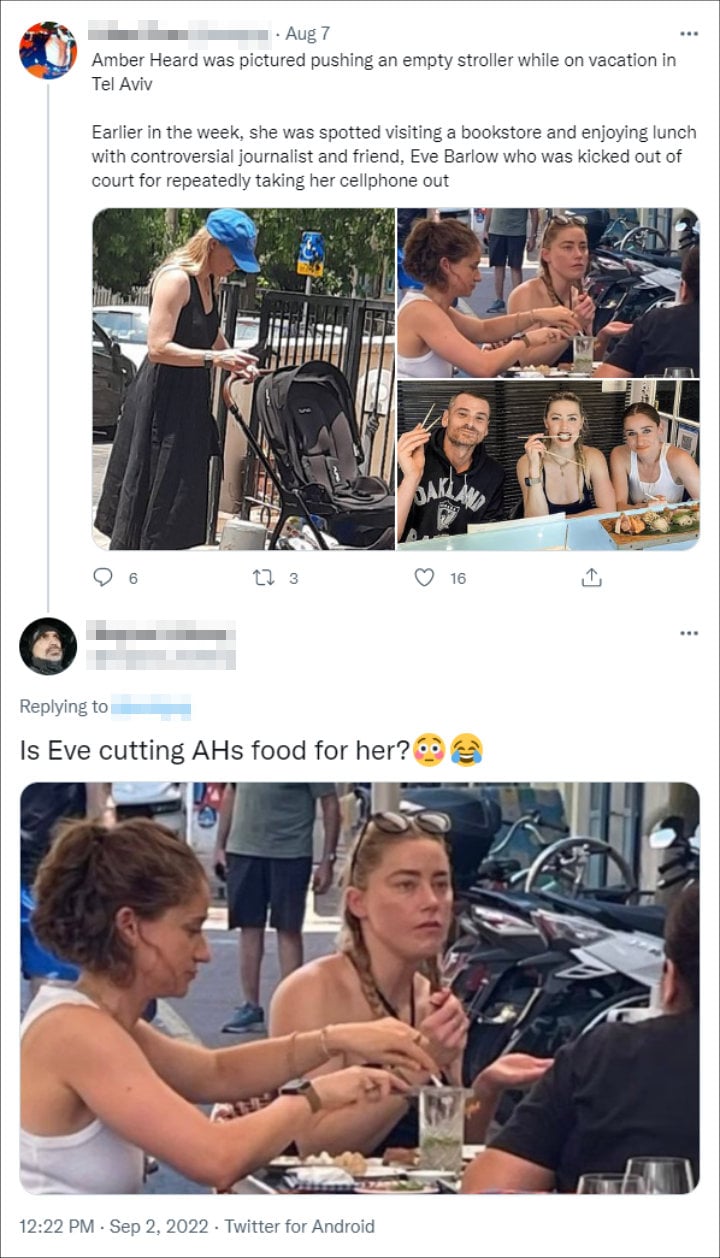 The trial ended on June 1 with the jury finding Amber guilty of defaming her ex-husband Johnny. She was ordered to pay him $10 million in compensatory damages and $5 million in punitive damages, though the court reduced the punitive damages to $350,000 due to state law limit.

Following the verdict, Amber admitted to being "heartbroken" and disappointed "beyond words" by the decision. "The disappointment I feel today is beyond words. I'm heartbroken that the mountain of evidence still was not enough to stand up to the disproportionate power, influence, and sway of my ex-husband," she said in a statement posted on her Instagram page.

"I'm even more disappointed with what this verdict means for other women. It is a setback. It sets back the clock to a time when a woman who spoke up and spoke out could be publicly shamed and humiliated," she added. "It sets back the idea that violence against women is to be taken seriously."

Amber has not shared any new post on her feed since then.

Amber Heard's Rumored Girlfriend Blocked by Organization That Supports Her