The actress/model's departure from the hit HBO series arrives after it was previously rumored that she and show's producer Sam Levinson had a heated argument on the set, though both HBO and Barbie denied the reports.

AceShowbiz - There will not be Kat Hernandez in the upcoming season 3 of HBO's "Euphoria". Model/actress Barbie Ferreira, who plays the iconic high schooler in the first two seasons of the hit series, shockingly announced her departure in an Instagram post on Wednesday, August 24.

"After four years of getting to embody the most special and enigmatic character Kat, I'm having to say a very teary eyed goodbye," the 25-year-old star wrote over a picture of an artwork by her "Euphoria" castmate Hunter Schafer. "I hope many of you could see yourself in her like I did, and that she brought you joy to see her journey into the character she is today." 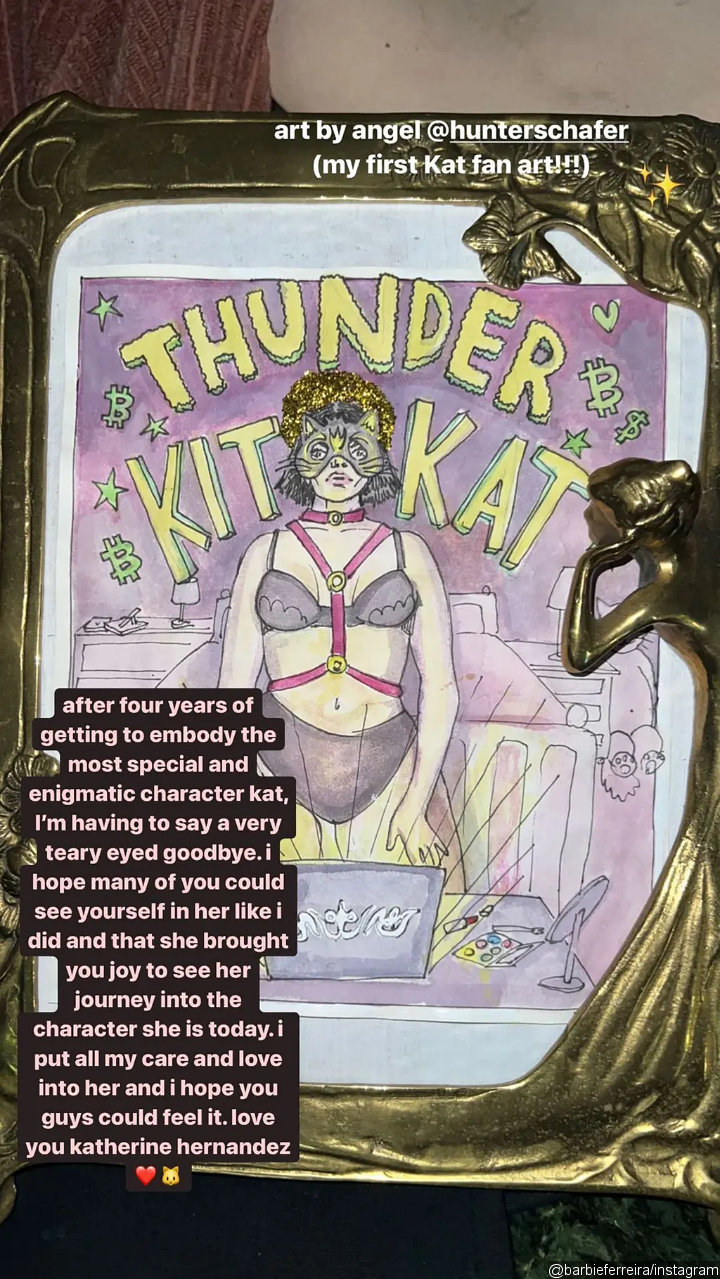 In the emotional post, she went on to say, "I put all my care and love into her and I hope you guys could feel it. Love you katherine hernandez."

Fans quickly expressed their sadness upon learning her exit. "BARBIE PLSSS NOOO KAT WAS SO AMAZING SHE DESERVED BETTER AND U DID TOO :(," one fan wrote in an Instagram comment underneath Barbie's latest post. Another follower pleaded, "Don't quit gurl [sic] we love you the mostest!!!!"

Some others, meanwhile, appeared to be less shocked by the news as Kat's storyline faded to the background in season 2. "I know it was probably not an easy decision but it seems so toxic. I'm glad you left," one fan said. "You are an amazing actor and deserve to be treated right. You have many amazing projects waiting for you."

In the sophomore season of the Zendaya Coleman-starring series, the screentime of Barbie's character got significantly reduced. The decision reportedly had something to do with the rumored on-set fight between the model and show's producer Sam Levinson.

The actress, however, shut the rumors down in a March interview with Insider. "I really think that the fans are really passionate and I do appreciate that because 'Euphoria' has really impacted so many people," the "Unpregnant" star explained. "Sometimes, things take on a life of their own, and they're not rooted in the truth, but it's okay because I know it's just out of passion and out of curiosity and all that good stuff. And I signed up for it. So, I'll take it. I'll take the good and the bad."

HBO also issued a statement to defend the show amid allegations that it has toxic work environment. "The well-being of cast and crew on our productions is always a top priority. The production was in full compliance with all safety guidelines and guild protocols. It's not uncommon for drama series to have complex shoots, and COVID protocols add an additional layer. We maintain an open line of communication with all the guilds, including SAG-AFTRA. There were never any formal inquiries raised," it read.

'Batgirl' to Get 'Funeral Screenings' After It's Canceled by Warner Bros.