Previously, the 'Transformers: Age of Extinction' actress shared a teary photo of her with a lengthy accompanying note, in which she slammed people who made her feel 'bad.'

AceShowbiz - Nicola Peltz has fueled rumors that she's currently feuding with her mother-in-law Victoria Beckham (Victoria Adams). Making use of her social media account, the "Transformers: Age of Extinction" actress thanked her father Nelson Peltz for always having her back.

On early Sunday, August 7, the 27-year-old beauty posted a photo of her hugging her billionaire dad on Instagram Story. Over the sweet dad-and-daughter photo, she cryptically wrote, "Thank you for always having my back I love you so much dad." 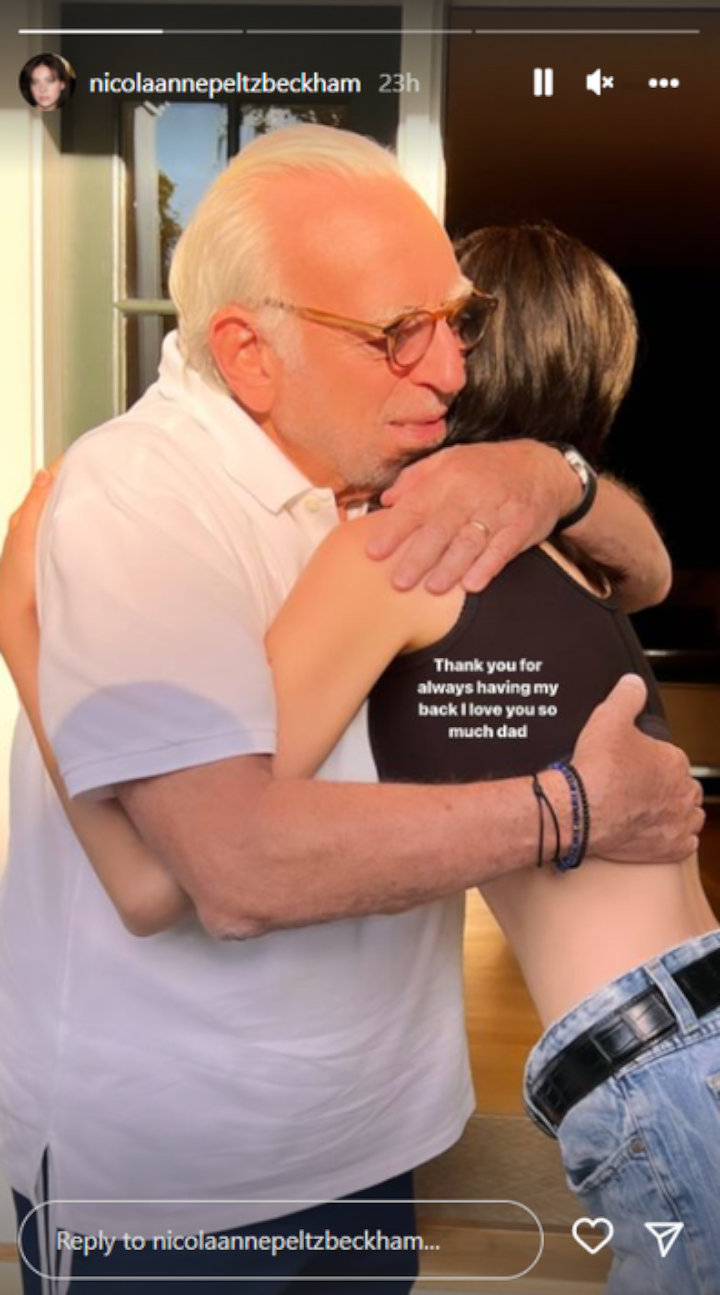 A few hours earlier, Nicola posted a selfie that saw her wearing dark designer sunglasses. Along with the picture, the actress shared a message thanking the fans who had supported her over the last few days. "Thank you from the bottom of my heart for all your messages," she wrote. "It means so much to me. sending you all my love and light your way [heart emoji] kindness is such a powerful thing," she penned in the caption.

Rumors of the feud between Nicola and Victoria have circulated since Nicola and Brooklyn's wedding on April 9 this year, with Page Six reporting that the pair are not on speaking terms. It was said that Nicola seemingly suffers from a little jealousy about her husband's globally renowned mom. The "Bates Motel" star allegedly wasn't thrilled that the 48-year-old beauty got a lot of attention, especially around her wedding day. Meanwhile, another report claimed that Victoria is allegedly insecure that she will lose Brooklyn to Nicola as they are living apart.

On August 5, Nicola hinted at the impact of the feud on her mental health by posting some photos of her with tear-stained cheeks and bloodshot eyes. Underneath the sad-looking pictures, Nicola added a lengthy caption. "Sometimes I find it hard to show the sad bits of me. Growing up with seven siblings and two very strong parents, made me really tough, they hammered it into me to not let people bring me down or hurt my heart," she wrote.

Nicola further noted that "we all have days where people make you feel bad and it's okay to be hurt by it." She later explained why she uploaded the post as saying, "I just thought I would write something because I never show this side of me here. I wanted to show this side of me."