AceShowbiz - Jeff Bridges has walked his daughter down the aisle after battling COVID and cancer. Taking on the role as father of the bride, "The Big Lebowski" actor helped his daughter Hayley Bridges tie the knot in California's Santa Ynez Valley, Santa Barbara county.

The 72-year-old Hollywood star and his daughter have only now been pictured in Brides magazine after the August 2021 nuptials. Wearing a navy blue suit, white shirt and light blue tie, he walked his youngest child down the aisle in Kestrel Park as the interior designer wed wealth advisor Justin Shane.

The ceremony was originally planned for August 2020 but was postponed due to the pandemic. After mask restrictions were lifted in California, around 123 wedding guests came in attendance.

About Jeff raising a glass to her and her new husband, Hayley said, "My dad gave a welcome speech and touched on a trait of Justin's that I also mentioned in my vows… which is that kids and dogs love him. I believe this to be an example of his wonderful energy."

Jeff has been married to his wife, film producer Susan Geston, since 1977. They have two older daughters, Isabelle and Jessica. The images in Bride magazine have surfaced after the actor almost died when he was struck with COVID in January 2021.

The "Bad Times at the El Royale" actor's resistance was compromised since he was undergoing chemotherapy for his non-Hodgkin lymphoma. He said he did not have the will to fight the virus at his best and felt he was "dancing with mortality."

Jeff has been in remission from lymphoma since September 2021. He is now promoting his new FX show "The Old Man".

William Hart of The Delfonics Dies After Suffering 'Complications From Surgery'

Comedian and 'Bust Down' Actor Jak Knight Dies at 28 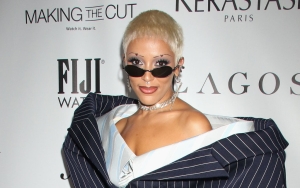