Comedian and 'Bust Down' Actor Jak Knight Dies at 28

AceShowbiz - No one is laughing for Jak Knight today for it's a sad day. The stand-up comedian, actor and writer has passed away. His family announced through a rep agency that he died on Thursday night, July 14 in Los Angeles.

"Knight's loved ones ask that their privacy please be respected during this extremely difficult time," the representative confirmed the sad news on Friday. Additional details, including cause of death, are not immediately given. He was only 28 years old.

Jak's death came as a shock to the comedy community and everyone he's worked with. His "Bust Down" family Peacock and Universal Television said in a joint statement, "We are devastated by the passing of Jak Knight. He was a brilliant comedian, visionary and artist and we were all lucky to experience his greatness. Our hearts are with Jak's family, friends and community during this heartbreaking time."

Comedy Central, which named Jak a comic to watch, posted a tribute on Twitter. "Jak Knight was a hysterical and honest comedian. We will miss him tremendously," it read. Music producer, DJ and rapper Steven Ellison, best known by his stage name Flying Lotus or FlyLo, called the late comedian "unapologetically bold and hilarious." Canadian comedian Eddie Della Siepe was also mourning, remembering Jak as "a phenom. An incredible talent and more importantly a great guy." 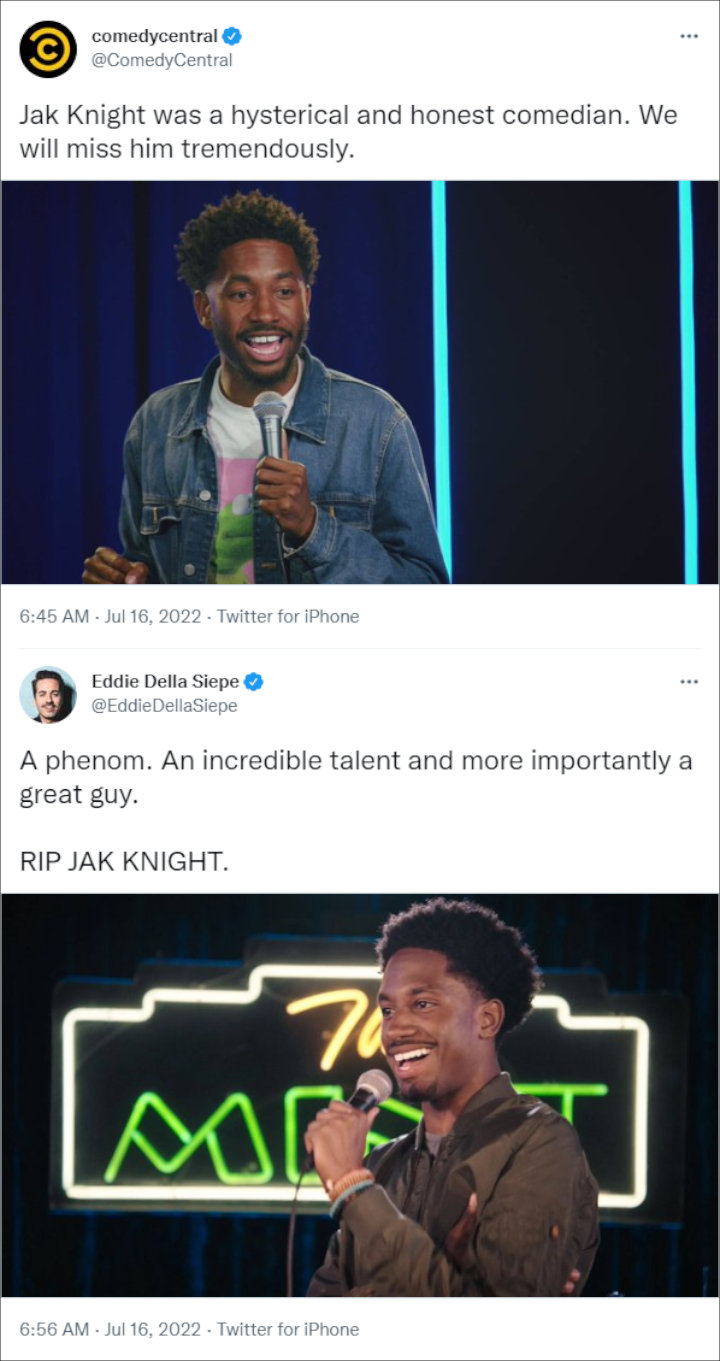 Jak's passing came as his star was on the rise. After writing for a string of hit shows, namely Netflix's raunchy comedy "Big Mouth" and ABC's critically-acclaimed sitcom "Black-ish", he co-created, executive produced and starred on Peacock's series "Bust Down".

He starred opposite co-creators Chris Redd, Sam Jay and Langston Kerman on the show that follows a group of friends working low-wage jobs at a casino in Gary, Indiana. Jak, whose credits included "American Dad!" and "Pause With Sam Jay", recently wrapped filming "First Time Female Director", the feature directorial debut of Chelsea Peretti, which was his first film credit.

Jak once credited Dave Chappelle and animated sitcom "The Boondocks" for inspiring his career in comedy. "One hundred percent the reasons why I do what I do," he said. He would then work with his idol Dave, opening for the latter on tour.

Comedian Jak Knight's Cause of Death Has Been Revealed