Eddie walks his eldest daughter, whom he shares with ex-wife Nicole, down the aisle as she marries her actor fiance in a private afternoon ceremony in Beverly Hills.

AceShowbiz - Eddie Murphy is now officially a father-in-law. The comedian's daughter Bria Murphy has married her fiance Michael Xavier after six months of engagement. They couple tied the knot in a private afternoon ceremony before 250 close friends and family on Saturday, July 9 in Beverly Hills.

In images obtained by PEOPLE, the bride looked stunning in a white off-the-shoulder lace Netta BenShabu bridal gown. She carried bouquet of white and red flowers. The groom wore a black Knot Standard tuxedo, styled by Dion Lattimore, with a pink rose boutonniere and a bow tie.

In one of the photos, the newlyweds posed with Eddie and his ex-wife Nicole Murphy, who is Bria's mother. Another snap shows the couple standing under a beautiful flower arch that decorated the wedding venue. 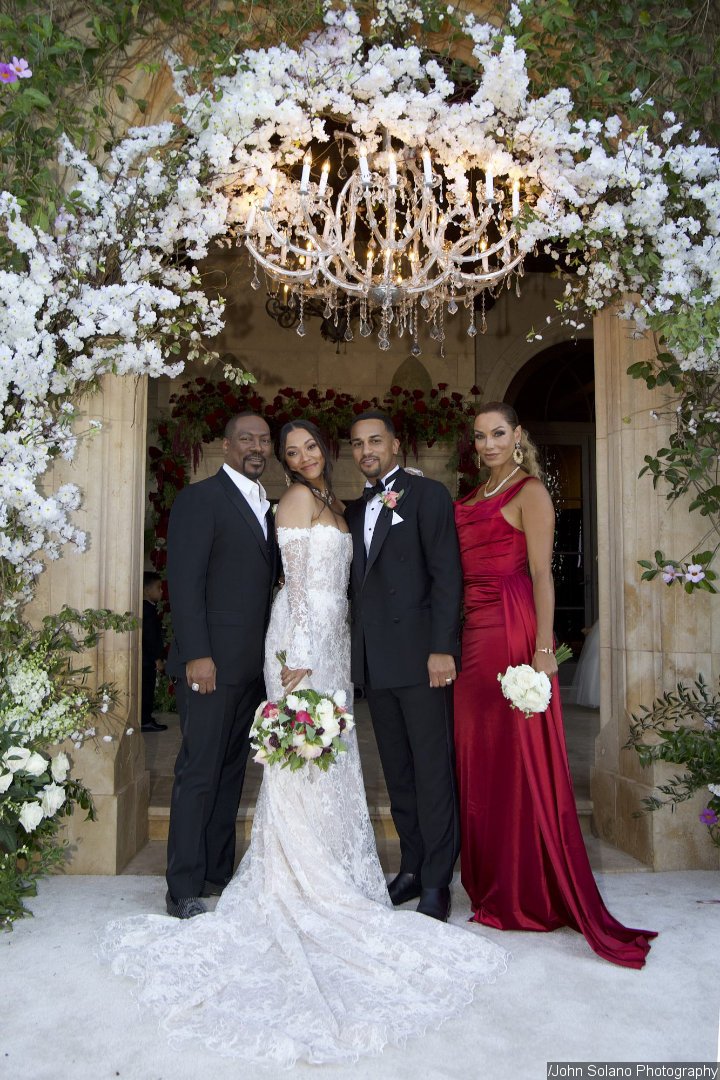 The pair also looked beaming as Bria sat on her new husband's lap in another image. Eddie, meanwhile, looked proud as he walked his daughter down the aisle in one other photo.

The celebration featured romantic decor including white flowers and candlelit chandeliers. The theme carried over into their reception, during which Bria changed into another white lace dress with a plunging neckline, while letting her hair down.

At the reception, Eddie delivered a heartfelt speech which was captured in a video by photographer Blair Caldwell. "I'm just very, very proud. Very, very happy," he said at the celebration. "It's very, very nice to see all of you and I wish Bria and Michael nothing but love and happiness."

The event also featured a performance by New Edition star Johnny Gill, who performed hits including his 1990 single "My, My, My" and a cover of Marvin Gaye's 1976 hit "I Want You".

In December 2021, Bria and Michael, who is an actor, shared a series of their engagement photos on Instagram. "My heart, my best friend, my forever." she captioned the images, "I love you, always." In his own post, Michael, who starred in "Shazam!" and "Rookie Blue" among others, wrote, "Forever my love."

Dave Davies Believes Aliens Ban Him From Having Sex

Golden Globes 2023: Cecil B. DeMille Honoree Eddie Murphy Takes a Jab at Will Smith in His Speech