In a social media rant against his now-girlfriend, the 'Fast and Furious' actor calls Zelie 'a masterful manipulator' and claims that he wants to settle down.

AceShowbiz - It seems that Tyrese Gibson has a lot to say about his girlfriend Zelie Timothy. The singer/actor has taken to social media to announce their split, which is apparently not amicable as he has launched into a bizarre rant against his now-ex.

On Thursday, July 7, the "Transformers" actor sent a message to Zelie with a shady Instagram post which featured a video showing a snake wrapping around a deer until being scared off by someone hitting it with a tree branch. Alluding to himself as the deer and his ex as the snake, he wrote in the caption, "Stop trying to convince me that your daughter is not a SNAKE."

The 43-year-old went on calling out Zelie, "I just want to be released from this strong devilish allure the sexual seduction of a masterful manipulator who knows how to [ convince everyone that she's not mean of there to KILL YOU.]"

"Please God RELEASE ME - RELEASE ME FROM YOUR POISON RELEASE FROM YIUR STRONG HOLD RELEASE ME I BELONG TO THE KINGDOM……. I have SO MUCH MORE WORK TO DO," he continued.

Tyrese further claimed that he wants to settle down, but Zelie isn't ready to get married. "I am single now and I want everyone to DM have fun with @zelietimothy. She's verified now and wasn't ready to be married. She still wanted to go BIG [and] live her best life," he explained. "I want to get married and settle down and really really NEST and embrace the COMFORTS of this FAMILY AND MARRIED LIFE……… I smoke hookah at home everyday so I don't want to be in your clubs or around your women I want to stay home and be the hard working family man that I am."

In another post, the Roman Pearce of the "Fast & Furious" franchise shared a video of an unknown woman and captioned it, "Damn I think I have a TYPE now……. She posted this not me………. I just follow the sexiest people on Instagram and get in trouble for 'Liking' their post. I just wanna feed you and we go to church together. I'm lost here without my wife and family."

"I can't be stable if my HOME isn't stable..," he elaborated. "Stability is important I got the money I got the [ mansions ] I got whatever you need I just need to figure out how to GET married and STAY MARRIED for the rest of my life……… Who has the secret? I'm ready to listen and lean."

Meanwhile, Zelie appeared to respond to Tyrese's claims via her Instagram Story. "Your acting off emotions and NOT facts! Hurt people hurt people. And I'm the wrong one to hurt!" she wrote, seemingly clapping back at the star. 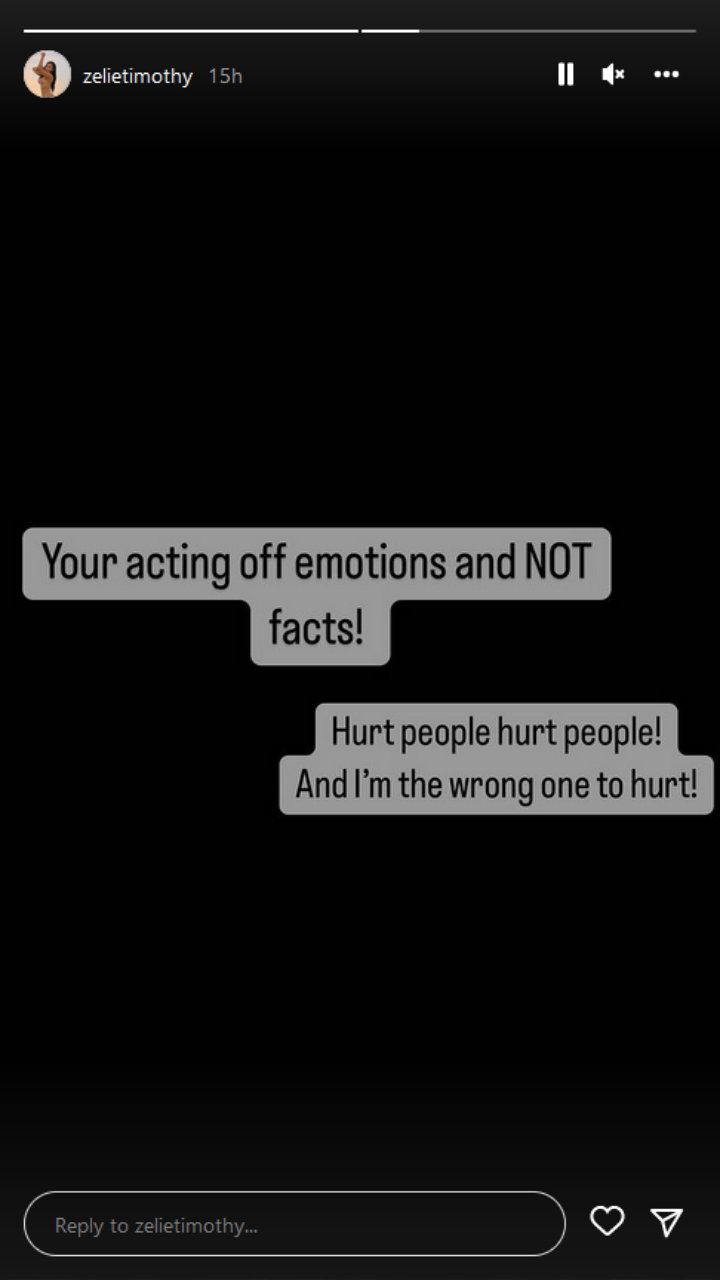 Zelie Timothy seemingly responded to Tyrese's rant against her.

Tyrese first made public his relationship with Zelie in March 2021 by sharing a video of them getting booed up inside a club. He was previously married to Norma Mitchell from 2007 to 2009. They have one child together, a daughter who was born in 2007. He later married Samantha Lee in February 2017 and welcomed a daughter in October 2018. In December 2020, they announced they were getting a divorce.

Nick Jonas Gushes Over Daughter Malti After She's Back From ICU