Hours before he was set to entertain his Toronto fans, the 'Love Yourself' hitmaker regrettably shares that he is dealing with a sudden decline in health putting his 'Justice World Tour' on hold.

AceShowbiz - Justin Bieber could do naught but vows to get better after his worsening health forced him to put his "Justice World Tour" on hold. Hours before he was set to entertain his Toronto fans, the Canadian pop star expressed his regret for having to postpone tour dates and promised to get better.

The "Love Yourself" hitmaker released the statement via Instagram Story on Tuesday, June 7. In it, he assured millions of his followers, "To all my people I love you so much and I'm gonna rest and get better!"

Bieber's promise came following his disclosure about his worsening non-COVID-related sickness. "Can't believe I'm saying this," the pop star, who boasts over 500 million of social media followers, began his statement. "I've done everything to get better but my sickness is getting worse."

Because of the deteriorating health, the singer husband of Hailey Bieber (Hailey Baldwin) was forced to put a pause on his "Justice World Tour". "My heart breaks that I will have to postpone these next few shows (doctors orders)," the "Peaches" singer said in the same post.

Bieber's announcement came only hours before his first scheduled show of his "Justice World Tour" in Toronto, Canada. The 28-year-old singer was initially set to perform at Toronto's Scotiabank Arena on Tuesday (June 7) and Wednesday (June 8) night respectively. 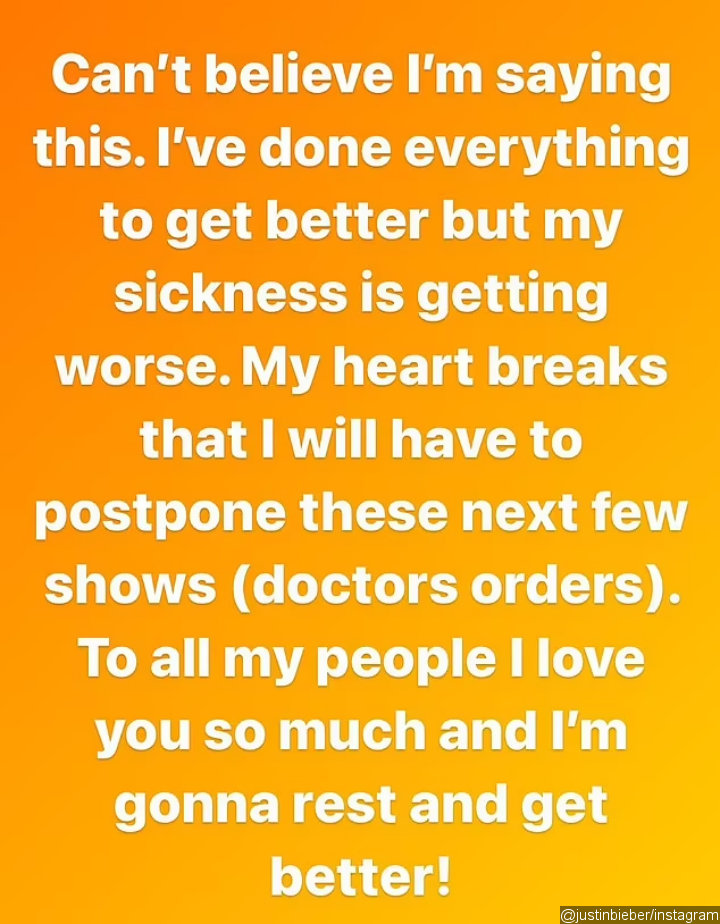 Justin Bieber vowed to 'get better' after postponing his upcoming shows in Toronto, Canada.

Following Bieber's announcement, Toronto's Scotiabank immediately posted a notification on their official Twitter media about the "Justice World Tour" rescheduling. They assured Bieber's fans that the exact replacement date will be announced shortly.

After his scheduled two-night run in Toronto, Bieber was set to perform in Washington, D.C., followed with two nights at New York's Madison Square Garden.

Bieber's "Justice World Tour" itself had been plagued with delays before. It was originally slated to be kicked off in the summer of 2020 before being postponed to 2021, and once again being pushed back to 2022 because of COVID-19.

Ringo Starr Calls Off Concert Due to Illness