During the latest episode of his show 'Jimmy Kimmel Live!', the TV personality says that he has 'the weirdest life' as he finds himself 'in the middle of a brouhaha' with 'the worst woman in American politics.'

AceShowbiz - Jimmy Kimmel has addressed Marjorie Taylor Greene's police threat. In the latest episode of his show "Jimmy Kimmel Live!", the TV host sarcastically said that he reported the "sweet little snowflake" congresswoman to Batman following her complaint she filed to the Capitol Police after he alluded to Will Smith by joking that he wanted someone to slap her over her comments on Ketanji Brown Jackson's Supreme Court confirmation hearings.

"@RepMTG reported me to the Capitol Police, so I reported her to Batman!" the 54-year-old TV personality wrote via Twitter along with a clip of the Thursday, April 7 episode of "Jimmy Kimmel Live!". During his show, he said, "I have the weirdest life, I really do. Once again I find myself in the middle of a brouhaha, as I appear to have run afoul of probably the worst woman in American politics, Marjorie Taylor Greene."

Kimmel continued, "On our show Tuesday night, MTG, Klan Mom, as we call her, earlier in the day called three of her fellow Republicans 'pro-pedophile' for supporting Judge Ketanji Brown Jackson's nomination to the Supreme Court." He later explained, "So I made a joke, I said, 'Where is Will Smith when you need him?' And the audience laughed. So she saw it and she decided she's going to try to get some political mileage out of this."

"Not only did she call the police, she called the same police she voted against giving a Congressional Gold Medal for defending our Capital against the insurrection she helped incite on January 6," Kimmel said. "It's amazing how quickly you can go from 'These liberals -- you can't say anything anymore!' to 'What did you say? I'm calling the cops!' It must be that cancel culture they're always talking about."

After Greene tweeted that she reported Kimmel to the police over his joke, Kimmel said that he's going to report her as well. As a lot of people "liked" his response, Kimmel told the audience, "And that triggered her I guess, the sweet little snowflake, because she tweeted again this afternoon," adding that he found it "very rich" that Greene, of all people, "is suddenly whining about 'fantasies of violence.' "

"She's a snowflake and a sociopath at the same time. A snowciopath, as we will call it from now on," Kimmel sarcastically joked. "I realize maybe other Republicans like having her around to make the rest of them seem normal."

Kimmel continued to mock Greene, saying that he would go "right to the top" and report her to Batman as he wrote a letter to the DC character. "Believe it or not, all that is maybe only the second dumbest Hollywood vs. Washington feud of the day. Senator Ted Cruz of Texas went after Mr. T last night," Kimmel shrugged. "And again I have to ask, 'Where's Will Smith when you need him?' "

This all began after Kimmel made a joke during his monologue in the April 5 episode of "Jimmy Kimmel Live!". "This woman, Klan mom, is especially upset with the three Republican senators who said they'll vote yes on Ketanji Brown Jackson, who's nominated for the Supreme Court," Kimmel said, referring to Greene. "She tweeted, 'Murkowski, Collins and Romney are pro-pedophile. They just voted for KBJ.' Wow, where is Will Smith when you really need him?"

Greene then called Kimmel's joke a "threat of violence against [her]" in a Twitter post. The Georgia Republican also told ABC she had filed a report over the joke to Capitol Police. Kimmel responded by mocking Greene, writing, "Officer? I would like to report a joke." 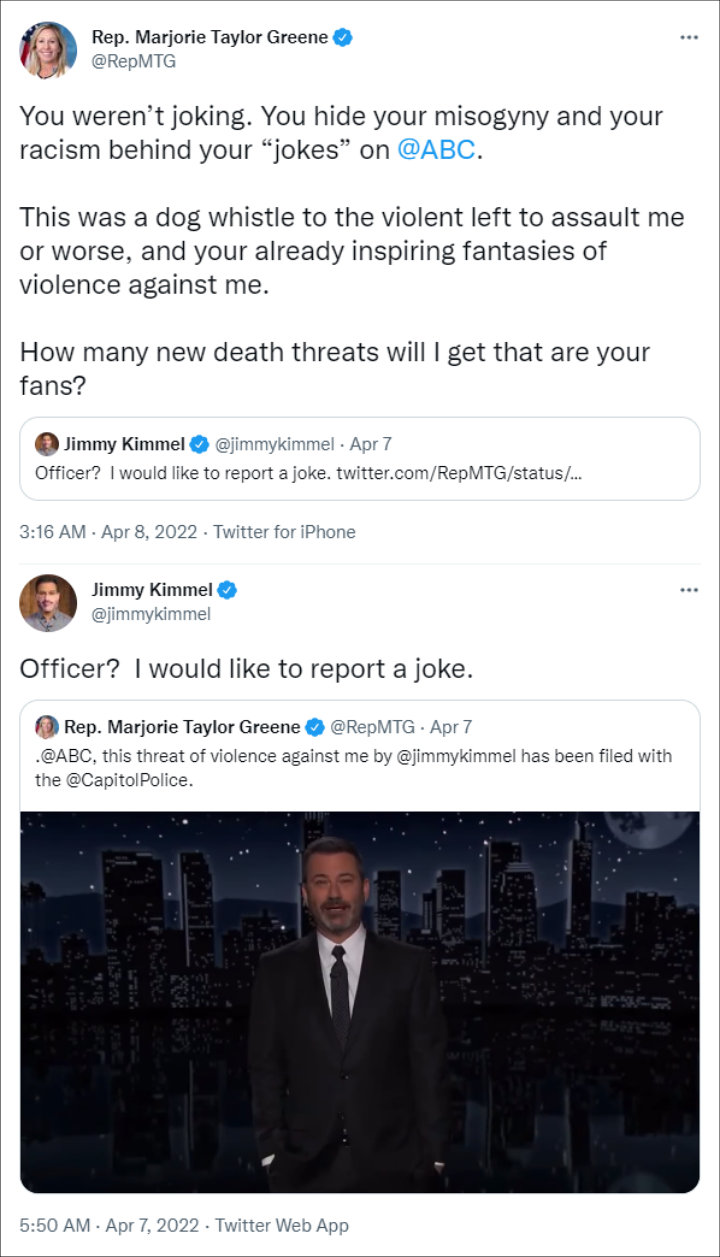 Marjorie Taylor Greene called out Jimmy Kimmel after he responded to her police threat.

Greene later wrote back, "You weren't joking. You hide your misogyny and your racism behind your 'jokes' on @ABC. This was a dog whistle to the violent left to assault me or worse, and your already inspiring fantasies of violence against me." She then questioned, "How many new death threats will I get that are your fans?"

Jimmy Kimmel Confirmed to Return as Host for Oscars 2023