Susan Sarandon Regrets Her 'Insensitive' and 'Disrespectful' Tweet About Police

After comparing cops who attended slain NYPD Detective Jason Rivera's funeral to 'fascists,' the 'Stepmom' star extends an apology to the family of the late officer.

AceShowbiz - Susan Sarandon regrets posting a meme about police which earned her heavy criticism. The actress, who has been an outspoken critic of police brutality, admits it's "insensitive" and "disrespectful" to compare cops who attended a funeral to "fascists."

The 75-year-old reflected on her controversial tweet on Friday, February 4. Returning to Twitter, she posted a statement which read, "I deeply regret the meme I recently shared on Twitter that included a photo of Officer Jason Rivera's funeral. I reacted quickly to the picture without connecting it to a police funeral and I realize how insensitive and deeply disrespectful it was to make that point at that time."

The Academy Award-winning actress went on extending her apology to the family of late NYPD Detective Jason Rivera, who was honored by his colleagues at the memorial. "I sincerely apologize to the family of Officers Rivera and Mora for causing additional pain during their time of grieving," she concluded her statement. 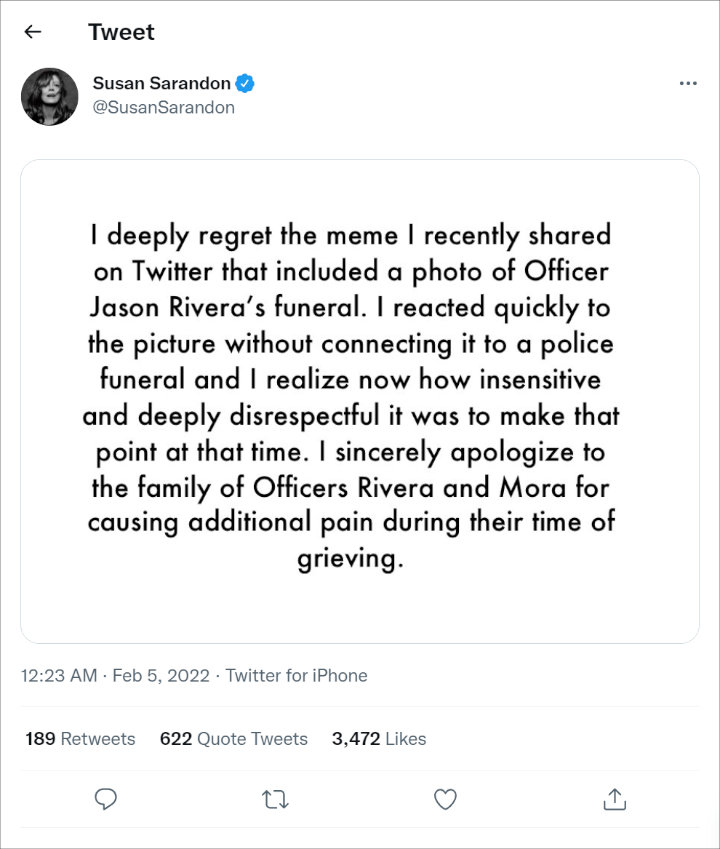 Susan Sarandon apologized for her 'insensitive' tweet about police.

Previously, Susan landed in hot water following her anti-cop tweet, in which she retweeted a meme that featured an image of thousands of NYPD cops gathering at Manhattan's 5th Avenue last week to honor the slain NYPD detective.

The original tweet came with a caption that read, "I'm gonna tell my kids this is what fascism looks like." Susan reposted the tweet last Tuesday, adding over it, "So, if all these cops weren't needed for CRIME that day, doesn't that mean they aren't needed ANY day?"

Among those calling out the actress was the Police Benevolent Association of the City of New York, which tweeted on Thursday, "This is what privilege looks like: a wealthy actress, safe in her bubble, mocking heroes & making light of the crisis that cops are battling alongside our communities. NYC is uniting to stop the violence - @SusanSarandon is living on a different planet."

Retired Los Angeles homicide detective Sal LaBarbera reprimanded the 75-year-old actress, "You seriously need help. Let's hope you never need us." Retired NYPD Detective Angel L Maysonet chimed in, "There are 35K #NYPD cops in NYC. This is 3 hours. Many off duty, other agencies, representing over 850K sworn LEOs in this country. Shame on you @SusanSarandon 2 young Dominican cops were killed & you spread anti police rhetoric. You're a disgusting person."

The National Fraternal Order of Police called Susan a "D-list actor" as it tweeted, "Of all the days for @SusanSarandon to share her true feelings towards police, she picks the day we bury our fallen brother to make such inflammatory & brainless comments. When you spend more time hating on cops than you do your own career, it's no wonder why you're a D-list actor."

Susan previously took part in Black Lives Matter protests and criticized the NYPD over its handle of protesters during the George Floyd protests in 2020.

Adele's Look-Alike Performs at Vegas Venue as Singer Steps Out With Rich Paul in L.A.

Susan Sarandon Under Fire for Comparing Cops at Funeral to 'Fascists'