In a new social media post, the former star of '16 and Pregnant' insists that the citizen's arrest was an 'organized crime,' while her lawyer stresses that the arrest 'was unlawful.'

AceShowbiz - Farrah Abraham is making it clear that she doesn't want to see people, who have been sexually assaulted, getting attacked. After being pinned to the ground and placed under a citizen's arrest at a club on January 15, the "Teen Mom" star took to her social media account to share her thoughts.

"Stop attacking woman who have [sic] been sexually assaulted. Enough is enough," the reality star wrote in an Instagram Story on Thursday, January 20 over a quote that read, "Rape and sexual abuse made me nothing, and in doing so made me something." In a separate Story, she reposted a note about normalizing "male violence."

"Women should be allowed to exist in public spaces," the post read. "Victim-blaming, telling a woman to not jog outside, to cover up, to not get drunk, to regulate their behavior, to remove themselves from society, all this perpetuates the message that male violence is the norm."

Following the incident, Farrah's lawyer Kia Feyzjou told TMZ that the 30-year-old TV personality is considering a civil suit against the Grandmaster Records Club. The "16 and Pregnant" alum also confirmed the news in an Instagram Story that read, "Justice will handle all who harass and target me. It's a shame it takes a group to attack me. Organized crime. The End." 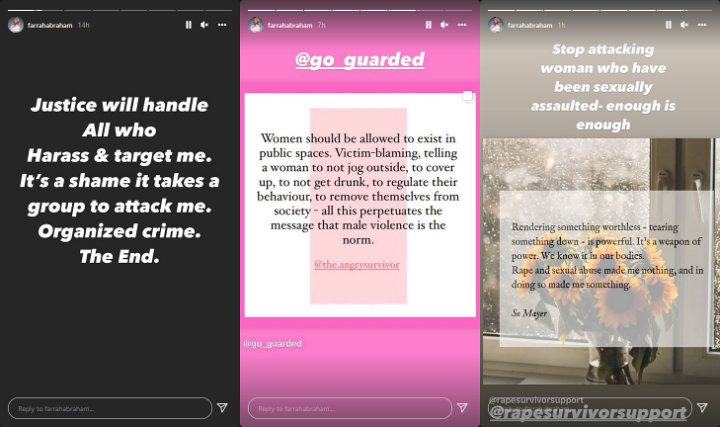 Farrah Abraham is planning to sue Grandmaster Records Club, noting that 'justice will handle' those who harass her.
See also...

As Kia explained, the citizen's arrest performed on Farrah was unlawful. Kia also insisted that Farrah should never have been taken into police custody. Kia further claimed that the security guards used excessive force when restraining her client, who is allegedly now in a lot of pain and distress.

On the other hand, the security guard, who allegedly was beaten by Farrah, spoke out in an Instagram post. In it, Megan Armstrong claimed that Farrah attacked her, adding a photo of her bruised eye to back up her allegation.

"This is all so embarrassing yet I have to stand up for myself, not physically, by hitting her back because that would cause problems for me," Megan wrote in the caption. She went on to note that she's "ashamed because [she's] walking around with a bruise on [her] face."

Megan further said that she felt "embarrassed" as she looked "like a punk." She continued, "People already look at me weird because I'm blind in the same eye she hit me in and my eye sometimes have a mind of it's own. Now I have this bruise. Ugh lord help me."