Tayshia, who completes the marathon in just under five hours, previously complains about being 'completely drained' and 'physically could not walk' after the marathon.

AceShowbiz - "The Bachelorette" alum Tayshia Adams was hospitalized just a few days after she participated in the New York City Marathon with fiance Zac Clark. Taking to her Instagram Story on Thursday, November 11, she shared a picture from a hospital bed.

"Welp, I've been here since 9:30 a.m.," the 31-year-old star wrote via her Instagram Story, adding "What a day." The reality TV star could be seen loudly sighing in the video, though she didn't offer details about why she was admitted. 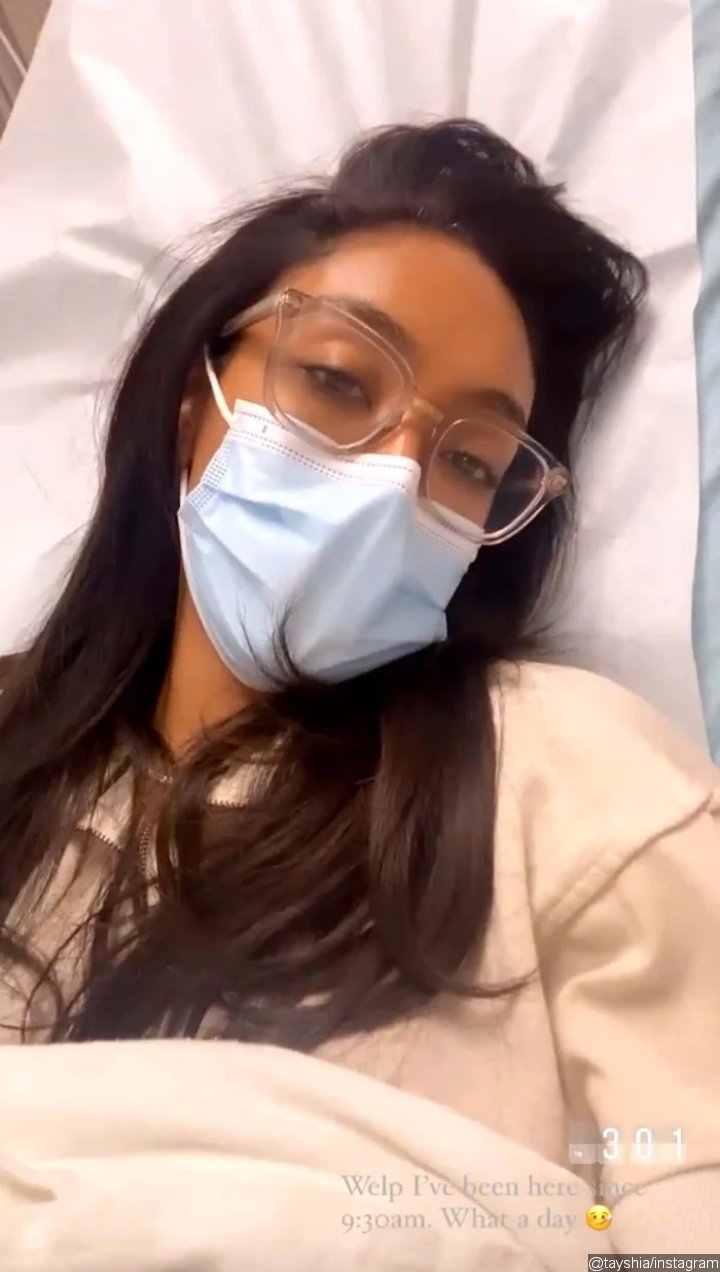 Tayshia Adam shared a picture from a hospital bed after marathon.

A source close to Tayshia told Us Weekly, "Details are unknown at this time but it is likely related to her marathon recovery." The night before, Tayshia attended a holiday dinner thrown by lingerie brand Victoria's Secret. Later in her Instagram Stories, Tayshia complained about the aftermath of the marathon which took place on Sunday, November 7.

She said that she had been "completely drained" and "physically could not walk" on Monday and Tuesday. The co-host of current season of "The Bachelorette" went on to call her marathon recovery "rough."

Tayshia and Zac completed the marathon in just under five hours. She was running in support of World Vision, which is a Christian charity specializing in humanitarian aid. Meanwhile, his fiance competed for his Release Recovery foundation. Zac praised Tayshia for her dedication to training and her perseverance during the course.

"The untold story about @tayshia is one of humility and courage. She would never tell the world how truly inspiring her performance was yesterday at the @nycmarathon but I will," Zan gushed over his lady. "Leading up to Sunday she did dozens of interviews where she could have talked about her chronic knee/back pain or her inability to train due to her insane schedule but instead she talked about her charity of choice, @worldvisionusa, and how grateful she was for all the support from family, friends, fans and strangers."

As for Tayshia, she had been documenting much of her preparation process on Instagram in the days leading up to the marathon. "No matter the condition or situation, I was committed to getting it done however or wherever I could, and because of that I can go into Sunday's race with pride," she continued. "My marathon time isn't going to be groundbreaking and I'm pretty sure I'll be cursing my way through some of it haha, but at the end of the day this isn't about me. I'm doing this for something bigger, and I can't thank you enough for all the support you guys have given me!"