Deyjah Harris Wants People to Stop Bringing Up T.I. and Tiny on Her Posts: 'Just Chill'

The 20-year-old star of 'T.I. and Tiny: The Family Hustle' expresses her frustration in a Twitter post underneath a gushing tweet about her mom Niko, who recently celebrated her 41st birthday.

AceShowbiz - T.I.'s daughter Deyjah Harris is tired seeing how her followers continue to bringing up her rapper and her stepmom Tiny a.k.a. Tameka Cottle in her mentions. The 20-year-old expressed her frustration in a tweet on Sunday, October 3 underneath a post about her mom Niko.

Deyjah took to her account to gush over her mom by posting some pictures of Niko donning bikinis from her 41st birthday celebratory in Greece. However, it seemed like she was bothered with the replies which focused on T.I. and Tiny instead.

"man why y'all gotta bring up my pops and stepmom everytime i post my mom?" Deyjah wrote on the blue bird app. "do those thoughts really need to be tweeted/said out loud? why we can't just enjoy the photos of her without some people bringing my other parents up…. just chill. everyone is happy so it don't matter."

In another post, Deyjah responded to a fan who wrote to her, "i'm sorry folks keep coming at you like that." In her replies, "T.I. & Tiny: The Family Hustle" star wrote, "it's ok, nothing i'm not used to but they literally only do this when i post my mom lol. like when i post my pops, don't nobody ever mention my mom so why are they mentioning him + tiny under her posts? just ridiculous tbh smh." 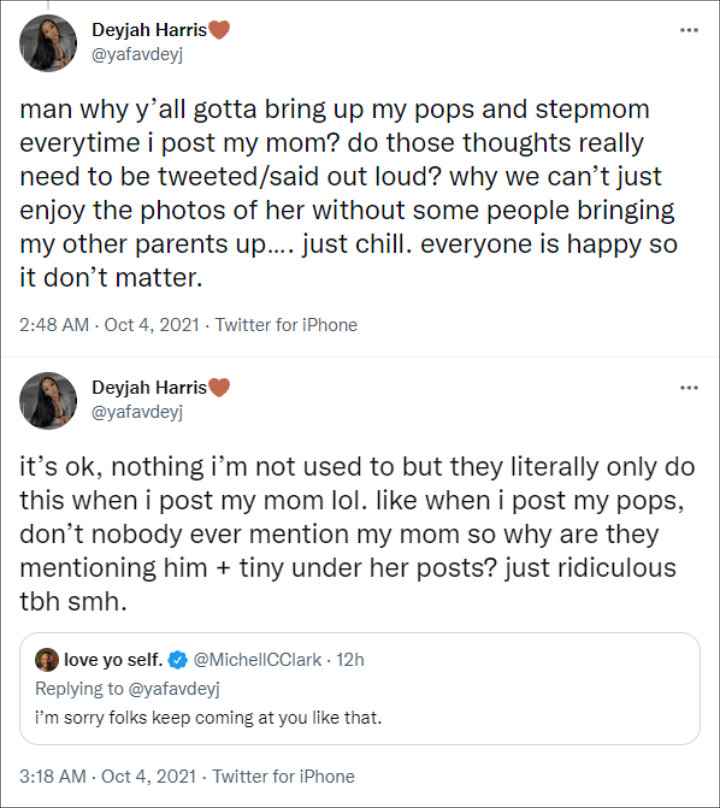 Deyjah Harris asked people to mention T.I. and Tiny on her mentions.

Back in April, Deyjah vowed to never speak about T.I. on social media anymore after one of her tweets blew out of proportions. At the time, she told her followers that her father asked if she wanted a juice when she was waking up in the early morning. She then said that she immediately feeling charley horse in her leg, prompting people to make "disgusting assumptions" based on her random tweet.

"I'm the type of person to include every detail in a story lol," Deyjah explained why she removed the tweet. "Imma tell you what time it was, what color the sky was, what type of mattress i was laying on (i'm being facetious but y'all get what I'm saying!!) so that's why i said the juice part, what time it was, etc. but it was completely blown out of proportion."

She continued, "I know that if I said my mom brought the juice, it wouldn't have been as serious. Which made me feel bad because i know that i can no longer speak on him anymore (on social media). that was my fault though, i should've just kept to myself instead of thinking i could be open with twitter like that, that's my fault."